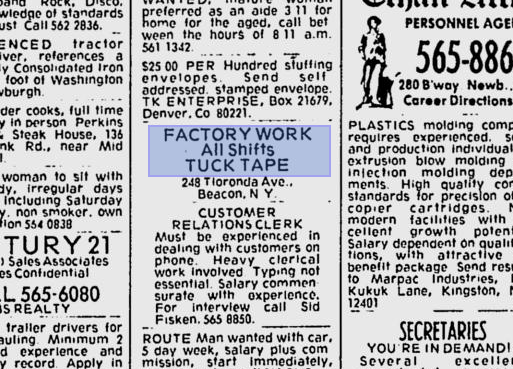 248 Tioranda in Contract For $10 Million

After receiving a 90-day extension of its subdivision approval at the July planning board meeting, Beacon 248 Development, LLC is in contract with a Westchester developer to sell the property, site of the old Tuck Tape factory for a rumored 10 million dollars.*  It was demolished in 2005 after a suspicious fire, despite assurances from the developer at the time, Advantage Partners Inc., that it would be repurposed. One of the last big mills in the Hudson Valley, it was built as a cotton mill in 1841, and became a rubber plant beginning in 1858.

After several years of winding through the planning board and the city council, the site plan has most of the necessary approvals in place, including a special use permit. Final site plan approval has been awaiting the resolution of several easement agreements, including one with the MTA concerning an emergency exit over the tracks. (The final plans call for a rather bizarre solution involving one way turns and an ungainly ramp near the Wolcott Avenue  bridge.)

If the prospective buyer is not a philanthropist intent on donating the property to the City for use as open space, it is likely that they will also be buying the existing site plans, which call for 100 units and 166 parking spaces. Otherwise, the new owners would presumably have to start back at square one if they have other ideas substantially different from what has so far been approved.

The property was also in contract in 2007 for $4.5 million, but that deal fell through when the seller could not get the agreed easements from the MTA. There were also environmental clean-up issues.

Another big potential land deal also rumored to be in contract is the Edgewater property owned by William Erlich. This is the parcel located north of the Beacon train station. It was rezoned at the developer’s request and is now approved for up to 300 units on the lot. The City is also applying for a grant to again look at rezoning its waterfront adjacent to this property.

The good news is that the likelihood of any of the actual building happening is low indeed. The bad news is that the reason is the global economy is fast approaching both limits to growth and the ability of mere humans to manipulate such a complex system to keep up the illusion that all is well. Tomorrow we’ll pause for a crash course on falling commodity prices and the Chinese stock market and what it all means for little old Beacon, New York and its dreams of becoming a Brooklyn neighborhood with a scenic natural backdrop.

*From the history of the Sloop Clearwater: The Clearwater organization filed the first successful prosecution against a polluter under the Clean Water Act of 1972 in New York State when it sued Tuck Tape of Beacon. Clearwater found that the factory had permits for two discharges, but in fact there were 23, releasing hot solvents, adhesives, sewage, latex, and titanium dioxide. In addition, chemicals leached into the creek from leaking barrels, and broken sacks. Clearwater collected evidence, set up a lab with high school students, and brought the evidence to the U.S. Attorney in Manhattan. The U.S. Attorney charged Tuck with 24 counts of violating the Clean Water Act. The company pled guilty to half the counts and wasfined. This case represented the first successful prosecution under the new Act in New York State.