I’ve already seen one headline, “Love in the Time of COVID-19.” It just doesn’t have the flow of Love in the Time of Cholera, the 1985 novel by Gabriel García Márquez. (Nor is it as exotic as Spanish Influenza.) But don’t expect that to stop reporters, bloggers, and other writers from using the formulation, in the manner of another book of recent years, Elizabeth Gilbert’s Eat, Pray, Love (Eat, Pray, Loathe; Eat, Pray, Spend; Drink, Play, F#@*).

Main Street Retail in the Time of COVID-19 could potentially have serious repercussions for Beacon, since Main Street makes up a disproportionate portion of what we might conceivably call our local economy. Excluding basic needs like supermarkets and dry cleaners and the drug store, much of Main Street relies on weekend tourism to push the books from red to black.

The markets and the central banks will be ministered with liquidity injections and lowered interest rates and other voodoo fixes from the witch doctors of financialization. Stay tuned to see how much help is extended to small business.

The bid to stop the spread of COVID-19 via quarantines and tests brings to mind The Little Dutch Boy who stuck his finger in the dike. Since that was actually a story made up by American author Mary Mapes Dodge in 1865, we can be fairly certain this doesn’t work well, despite the happy ending in Hans Brinker; or, the Silver Skates: A Story of Life in Holland.

Another meme that seems apropos is the idea of six degrees of separation, aka the six handshakes rule. This also has a literary origin, the 1929 short story “Chains”, by the Hungarian writer Frigyes Karinthy. The story illustrated what Karinthy believed were the shrinking social distances made possible by the increasing connectivity of the modern world. The idea was revived and re-popularized in John Guare’s 1990 play, Six Degrees.

One of the scary things about a virus pandemic is loss of control. We want to do our best to contain it, of course, but even if there existed absolutely competent organizations and governments around the globe, some things are just beyond our control.

For Doomer Boomers like me, the first disease we worried about was probably VD. Then it was herpes. Then STDs, Aids/HIV and other auto-immune diseases like mono and Epstein-Barr. Now lyme disease is the one front and center (though that may say more about where Boomers are in the trajectory of life these days.) I was in the park yesterday lying on the grass when I heard one kid say to another “Yeah, that was before they discovered the coronavirus.”

With most of these afflictions, there is some ability to control your risk factor, if not eliminate it. A virus like COVID-19 seems more existential, more random, more fateful.

A good deal of the main stream reporting manages to mention the number of companies working on vaccines, and how many weeks away a vaccine might be from testing on humans and general availability. Not happening. Not in that timeframe, if ever. We still don’t know how this will play out, whether it might produce a second, deadlier wave of infections, as Spanish Influenza did one hundred years ago.

Around these parts in 1776, in a year where he led battles in White Plains and Boston, General George Washington order all his troops inoculated against that scourge of armies, small pox. This would have been done with a small dose of the live virus, which was not without risk. The practice was brought from Turkey to England in the early 1700s, but it had been a folk remedy in Asia for centuries.

Twenty-two years later, in 1798, an English country doctor noticed that milkmaids never seemed to contract small pox. He surmised that they contracted cow pox, which gave them immunity from small pox. Cow pox is benign to humans, and made a much safer vaccine–though there were still plenty of anti-vaxxers back then. Maybe we need to start drinking bat blood. 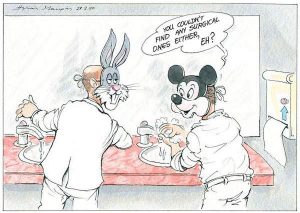 I’m waiting for the T-shirt mills to start cranking out tasteful wearables: I Went On a Cruise And Got An Extra 14 Days Free! Good news, though–you definitely can’t get coronavirus from drinking Corona beer. Maybe it tastes so bad your inhibitions never get low enough to allow infection? Here’s what Barron’s had to say about it:

The company said Corona Extra beer sales grew 5% year over year for the four-week period ended Feb. 16. Americans, it seems, are still drinking Corona. That’s a good sign about the collective intelligence of the population, regardless of the signals from the Twitterverse.

What’s so smart about drinking bad beer? Meanwhile, I wait for the refrain of Mu-Mu-Mu My Corona to stop running around in my head.

Another quote from Plagues and People (see last week’s post):

“Ingenuity, knowledge, and organization alter but cannot cancel humanity’s vulnerability to invasion by parasitic forms of life. Infectious disease which antedated the emergence of humankind will last as long as humanity itself, and surely remain, as it has been hitherto, one of the fundamental parameters and determinants of human history.”