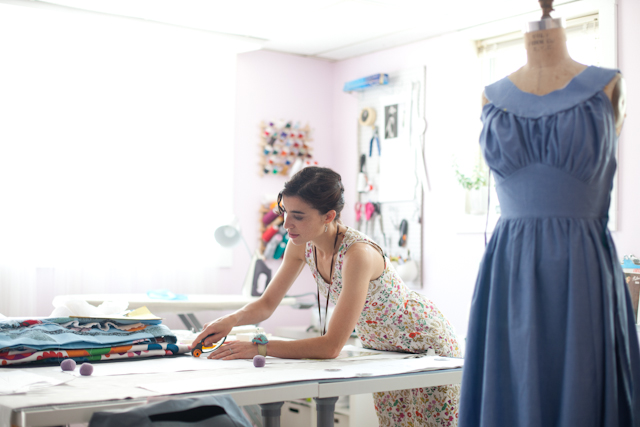 The owner of By a Thin Thread, a shop on Main Street that does alterations and custom work, refers to herself as a seamstress. “It’s an antiquated term,” says owner Allyson Vermeulen, who is in the process of relocating the shop from the west end of Main to the Beacon Theater building. “But I like it, and it covers all the bases.”

The definition, a woman whose occupation is sewing, is succinct, but it does tend to leave out the juicy tidbits and perks, such as seeing Saturday Night Live star Will Farrell in his lucky underpants every week. This was a privilege that came with one of Allyson’s early internships in the business. “The cast had these little dressing rooms across from the costume shop,” she explains, and Farrel was in the habit of traipsing in wearing only his “show” underwear, a brief style featuring a white and green print design. “He has no shame.” For that priceless opportunity, she received college credit and ten dollars a day for lunch. 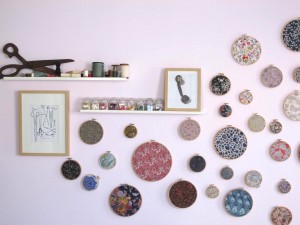 Allyson is partial to using vintage fabrics in her custom work.

Less than a year earlier she had been on the performance track as an acting major at Fordam University’s Lincoln Center campus. But after a junior year stint in the costume department as part of the curriculum’s required 40 hours per semester of behind-the-scenes work, she experienced a life-altering moment. “I loved it, because it was tangible, you could perfect it, and know when you were done,” says Allyson. “I ditched acting and signed up for a sewing class.” A summer internship at the Public Theater’s Shakespeare in the Park followed, and by her last semester she was barely going to class while being exposed to the underwear of the SNL cast members. 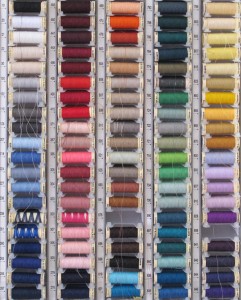 “I wasn’t dressing the stars,” she says. “But I was carrying their clothes.” When Jennifer Lopez hosted SNL, a skit was developed involving a bathrobe and her famous Grammy Awards gown, a green and blue Versace number with cleavage to the navel. But the dress had been damaged, and it was Allyson who carried it down Fifth Avenue to Versace for repair.

Her real training in the art of alterations began with Law and Order: SUV, a job with pay and health insurance. Because it is a contemporary setting, the show involves a lot of shopping off the rack and altering to fit. She would trundle off with those clothes to the 20th floor of a building across from Macy’s, to be altered by Pierre of Paris. “He was an adorable little round Greek man.”

It was on the first day off during a seasonal hiatus from shooting in the summer of 2003 that Allyson and her husband Jim, a theatrical lighting designer she met at an off Broadway production company, came up to look at houses in Beacon.  “Yes, we came from Brooklyn. But Bay Ridge Brooklyn, not super cool Brooklyn,” says Allyson. In October, the couple closed on a house they saw that first day. 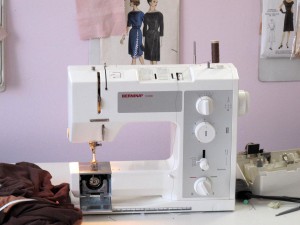 “Sewing is a marriage of the things I’m good at and like to do–create patterns, math problems, make things.”

From that point it was all about juggling family with work. Allyson and Jim now have three kids: Lucas, 9 , Peter, 7, and Jesse, 4. Wigwam had a question: Does mom sew pro and at home, or is this a case of the cobbler’s children have no shoes?

Allyson says she still makes time to sew dresses for herself, but the jury is out on the rest of the gang. She has tried selling the kids on homemade Halloween costumes, with mixed results. Though she was super proud of the pleather shell, a Ninja Teenage Mutant Turtle outfit for Lucas when he was three was more tortoise than mutant. (A skunk number was rejected outright the year before.) The kids are happy with costumes from Target, which gives Allyson the heebie-jeebies. But things took a positive turn  for mom last year, as Lucas required a grim reaper cape that was not commercially available. Mom even had enough black wool leftover from that costume to make herself a dress.

On the business side, Allsyon has had various iterations in the last ten years, including an Etsy store featuring dresses made from vintage prints, handbags made from vintage fabric made for Relic, a former antique store on Main Street, and a small retail shop where Homebrew is now, next to Seoul Kitchen. The last is where she learned that sitting around all day waiting for customers to come by was not her thing. Esty taught her that it’s hard to keep a stock of custom-made items. These days she has a waiting list for custom creations, and only takes on two or three each month.

The current business model of By a Thin Thread originated with dresses that she was making for Echo, the toy store and women’s clothing shop at 470 Main. Her email address was on the hang tags, and people started contacting her about custom work and alterations, so she made that her focus and took a studio at the old high school. Between the location and raising three kids, that was a low key operation. The next move was subletting some floor space with NFP Studio at 457 Main Street, and when that space was no longer available, moving to 145 Main, next to the Fovea gallery.

Between word of mouth and a YELP listing, her business has been growing. About thirty-five to forty percent of it these days is formal wear–mostly wedding and prom dresses. “Brides want every part of their wedding to be special,” says Allyson. “They don’t want to go for alterations at the dry cleaner or a farty old man tailor shop.” The latest move is happening because she has decided to embrace that side of the business, and, though she never had a complaint, she was always cringing when she sent customers into the kitchen area to change.

The new space will have a dressing room, a huge working table, and a point of sale area. Right now her husband Jim is overseeing the build out–the space was raw and needed just about everything, right down to electrical outlets. By a Thin Thread is set to open at 445 Main Street in early April. The hours in the new space will continue to be by appointment until September of this year, when the kids will be in school full time. 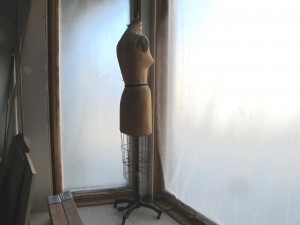