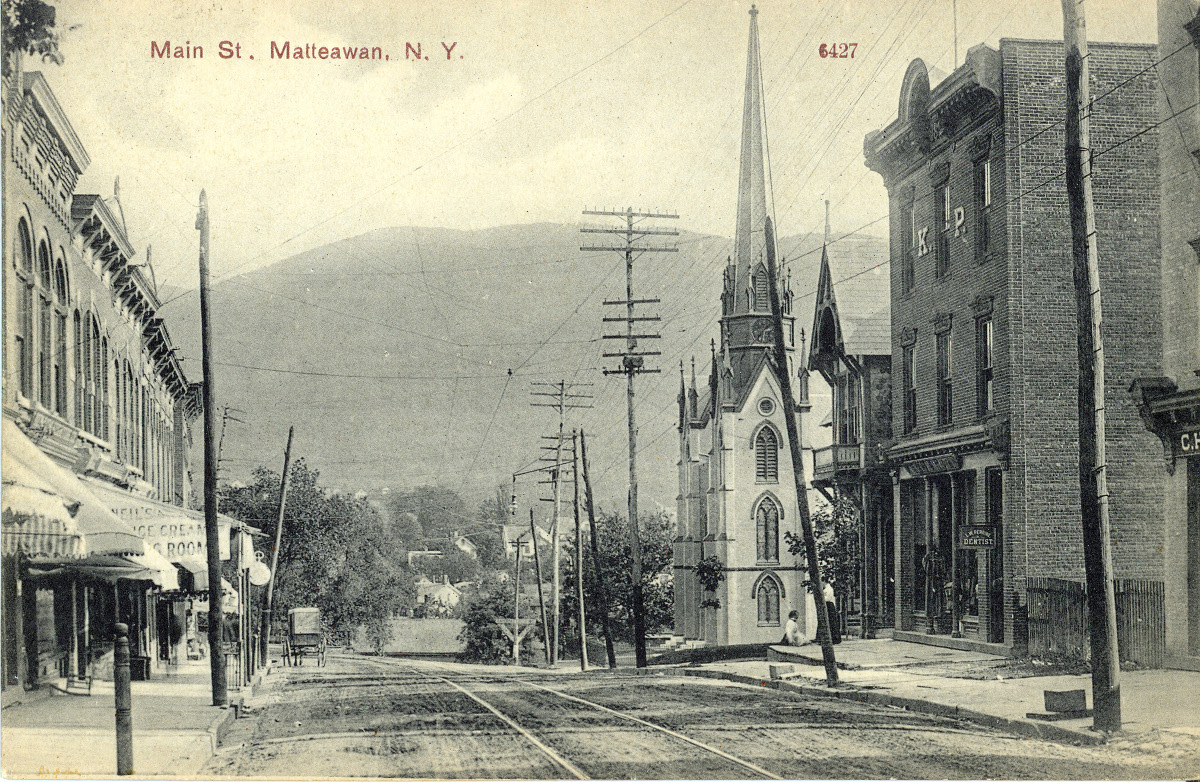 Yes, it was another scintillating workshop session devoted in large part to fine-tuning the newest zoning codes. Highlights included defining the phrase “owner occupied” and a long discussion about awning materials. I always thought “owner occupied” meant the head of the household was in the bathroom at the moment. The gist of the great awning debate was that the code was written so that canvas, metal, and glass were appropriate materials, but vinyl and aluminum were to be outlawed, and did this seem reasonable or should it be modified in some way?

Aside from the awkward fact that many people consider aluminum to be a metal, there are several problems with specifying canvas as the only fabric allowed.

As a former employee of the Buffalo Awning and Tent Company, I installed my fair share of awnings all those summers ago. The BA&TC awnings were made of cotton duck canvas, the traditional awning material, and were fabricated and repaired on the second floor of an old factory with industrial sewing machines operated by middle-aged Polish women.

Although canvas, with its tight weave, makes an attractive, functional awning, it has a relatively short lifespan and is subject to mold, UV damage, and sagging over time. It requires diligent maintenance and ideally needs to be removed and stored in a cool, dry place during winter. Buffalo Awning offered a storage service to its clients. Even with proper care, canvas needs to be replaced fairly often—good for Buffalo Awning and Tent, but not so good for business owners, especially as canvas material went up in price. It’s not hard to imagine that awning repair and replacement would have been one of the first things to go when Main Street economies started to decline after mid-century.

Meanwhile, in the 60s and onward, many newer awnings took on a more purely decorative role, or were used primarily as signage. Vinyl became a popular material due to its longer lifespan, easier maintenance, and its capability of being pulled tight with no wrinkles (the American fixation with youth manifests in many ways.)

The east and west ends of town have an historic overlay and therefore awnings in those areas are technically subject to architectural review standards. But the Central Main District is a bit more of a free-for-all, and a strict awning code doesn’t make much sense for a zone that has three gas stations and a building with giant round windows.

In fact a traditional canvas awning might look out of place on some of the architecture in that part of town. Besides, even the canvas awnings are now often a blend with acrylic, or treated with it to help extend the life.

That said, it is true that the Rite Aid windows, with the blue rounded vinyl things, are very late 80s strip mall. Simple wide-striped canvas awnings, perhaps in a maroon and cream colorway, with no sides or valances, properly aligned over each window, would compliment this attractive building. Now is the time, as the company is expanding its Beacon location. 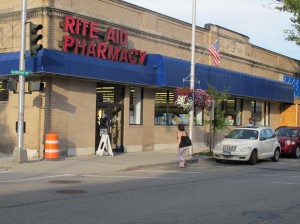 More appropriately designed awnings could bring out the elegant lines of this building, once a fancy department store.

In their wisdom and after much verbiage, I think the final outcome was that the council declared all materials are okay, but some will be encouraged, while others will be discouraged. A public hearing on the zoning tweaks will be held this Monday, July 21.

These contemporary awnings, sans sides or valances, do not line up with the building fenestrations, but they do add a nice splash of color to the streetscape. 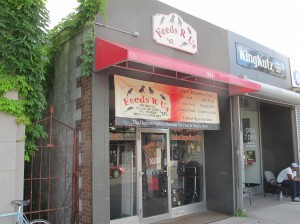 This plastic awning doesn’t necessarily offend aesthetics on this building in the Central Main District. 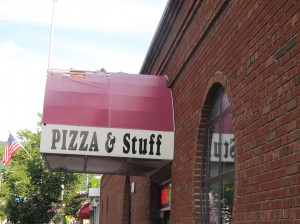 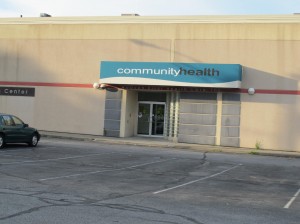 This awning functions mostly as signage. 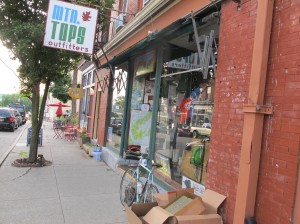 A vintage roll up awning is still in place at Mountaintops.

The bad news is the planning board reported back to the city council and came down 5-2 against a newly drafted law that would permit owners of empty lots to operate food trucks and temporary craft stands on the property. The good news is its vote does not really matter. The ordinance is scheduled for a public hearing this Monday, July 21. Go to city hall at 7pm and put in your 2 cents. Meanwhile, our peregrine purveyor of gustatory delights, aka The Beacon Bite food truck, has been spotted at Vassar College and Vassar Hospital during the week, and down at the Beacon Farmers Market on Sundays.

Peoples Bicycle was the only company to respond to an RFP for a bike rental operation at the waterfront. The deal has been approved, and bikes will be available most days starting at 11 am. A mobile rental display will be set up by the Welcome To Beacon sign at Red Flynn Drive. Regular pedal bicycles will be $15 an hour or $50 per day. Electric assist bicycles will rent for $25 an hour or $70 per day. MetroNorth has said it will help publicize the service. 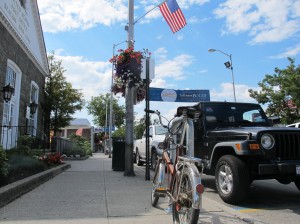 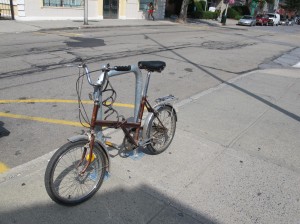 In bicycle parking news, classic U-shape bike racks, courtesy of Dutchess County and the Bicycle Pedestrian committee, are appearing in various locations around town, including two in front of the post office. In other bike transportation news, the Newburgh-Beacon Bridge walkway closing has been extended another month on weekdays through the month of August. Read here for more info and where to call to doublecheck weekend access. 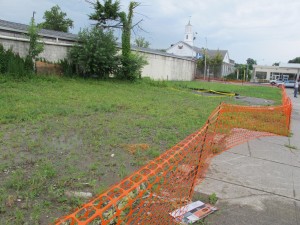 Persistent rumor on the street has it that the developer of the lot at Eliza and Main has lost critical financial backing. Hopefully that is not the case. Things have certainly been moving slowly, and deadlines for various stages have been missed or postponed. For instance, according to the contract, the lot was to be graded and seeded immediately after demolition was completed, weather permitting. But the lot is full of weeds.

If it’s true that the money has gone south ( a definite risk with projects of this nature), that would be unfortunate for the developer. However, it would give the city a chance for a “do-over” on a deal that has been plagued with problems since the day the contract was awarded. More on this soon, depending on what happens next.

Remember that classic headline? It was cooked up to sell more blog views, but truth is stranger than blatant marketing ploys and journalistic irony and exaggeration. The rumor mill  has confirmed that the owners of The Mill House Brewing Company (get it?) in Poughkeepsie have purchased a building in Beacon, at the eastern corner of South Cedar and Main. Another rumor has it that the MHBC food is quite good, but the beer is only so-so. Our staff does not drink beer, so this rumor cannot be reliably or unreliably verified or denied. In any case, the restauranteurs from Po’town may choose to try something a little different in Beacon, especially since we already have a number of fancy beer places, with more to come. In fact, another rumor has it that a certain restaurant bar (Hint: State tree. No? Hint: chienbois.) has plans to brew a few batches down in the basement (biére au sous-sol.) Cellar moonshine, a little sawdust, and a nice awning to keep out the sun. Now that’s what I call historical Beacon. 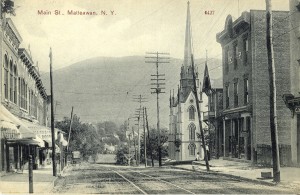 Feature photo courtesy of Beacon Historical Society. Note the charmingly rag-tag appearance of the awnings, which form a virtual canopy over the sidewalk. They match the hand-carved look of the utility poles. Note also the horse parking rack in the left foreground.