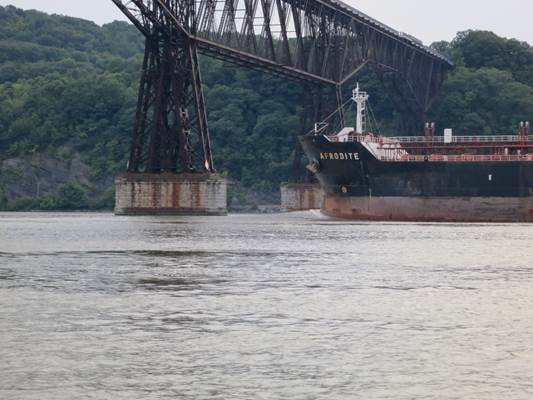 What value does a cleaner Hudson River add to our economy?

The New York Times is now covering the issue regarding the transport of Bakken crude, which is “extremely volatile.” :

After an oil train derailed and exploded near Casselton, N.D., late last year, federal regulators warned that Bakken crude oil was extremely volatile. On Tuesday, they ordered shippers to properly test and classify Bakken crude before loading it onto freight trains.

Well, at least it will be labeled properly when it goes off. Unfortunately, transport by rail is regulated at the Federal level, not the State:

There is not much New York’s officials can do to reduce the flow of oil trains, despite the state’s commitment to low-emission fuels and its opposition to natural gas drilling and hydraulic fracturing. Officials acknowledge that they are powerless since railroad commerce is regulated by the federal government.

Okay, but what about the barges on the river?

Trains now come into Albany on average twice a day after completing a four-day journey from North Dakota, either through the Canadian Pacific network, via Montreal, or on the CSX rail lines that pass through Buffalo and Syracuse. These mile-long trains, each up to 120 tank cars long, can carry roughly 85,000 barrels of oil.

Once in Albany, the oil goes into giant storage tanks before being loaded onto barges that make daily trips to refineries down the Hudson. Some trains go to Pennsylvania. Every eight days, a bigger tanker, a Bahamas-flagged ship called the Afrodite, which replaced the Stena Primorsk after its accident, picks up oil destined for Irving Oil’s refinery in Saint John, New Brunswick, which produces gasoline for the American market.

We can’t stop it, so we are reduced to planning for disasters:

But there remains considerable uncertainty about how authorities would respond to an accident or a spill in the Hudson River. The Coast Guard conducted a drill in New Windsor last November. The mock event involved the derailment of four train cars and a 50,000-gallon spill in the Hudson from a storage tank.

The full article in the NYT:  Bakken Crude, Rolling Through Albany

A fact sheet from Riverkeeper:

One Response to Bakken Crude Transport: The New Fracking?