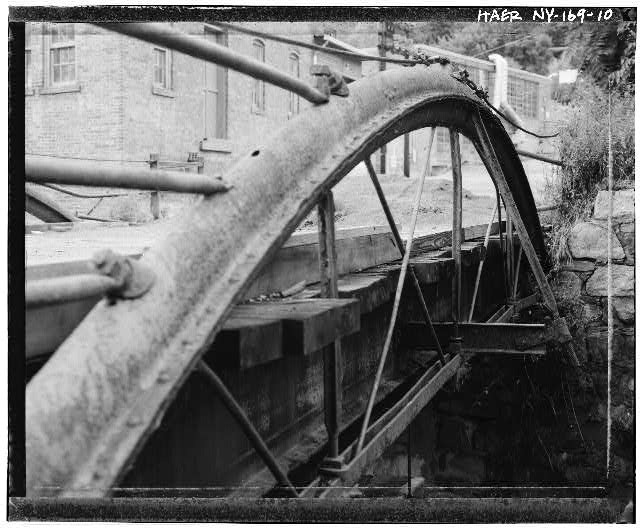 Monday’s City of Beacon council meeting may have been the death knell for one of Beacon’s historic treasures. Just before the vote for consideration of a resolution to authorize submission of a funding application for the planning of the new South Avenue Bridge, council member Charles Kelly asked about the old bridge’s trusses, which have been “stored” against a fence at the transfer station for a number of years.

“According to the city engineer,” said city administrator Meredith Robson, “even just to move it would cause it to fall apart.” And that was that, end of discussion.

Years ago I came across the U.S. Department of the Interior National Park Service nomination report form for the Tioronda Bridge to be placed on the National Register of Historic Places. Its condition when the report was written in the mid 1970s was listed as “good.”

Rather than pull out highlights, I’m including the entire written portion of nomination report (minus one technical paragraph) because it illuminates both local and national history.  (Props to the person who typed the original on a typewriter back in the day.) Here you go:

Describe the Present And Original (if known) Physical Appearance

The Tioronda Bridge carries South Avenue over Fishkill Creek in the southwestern portion of the City of Beacon. Occupying an area of less than one acre, the bridge is surrounded by saplings and undergrowth on the stream banks. Light industry occupies several brick buildings on the Fishkill’s west bank, slightly south of the bridge. The Tioronda Bridge is a manufactured three-span vehicular bridge constructed of iron and situated on the site where it was originally erected. The overall length of the bridge is 110 feet. Each span is nominally thirty-four feet in length measured from the outer ends of the truss bearing shoes, and sixteen feet wide measured from center to center of opposite trusses. The end abutments and two midstream piers are of mortared natural stone laid in random ashlar fashion.

The upper chord (bowstring) of each truss is formed from a continuous, arched tube constructed from two flanged semi-oval iron plates riveted together at the flanges. They enclose an iron diaphragm which lies along the minor (horizontal) axis of the tube. This arched tube and the details of its construction are the distinctive features of this bridge and the principal claim of its patent.

The bridge trusses now serve only as guide rails since the original deck and floor beams have been replaced by five parallel I-beam stringers which bear on the original abutments and piers, and which now totally support traffic.

The Tioronda Bridge is an important transportation landmark erected sometime between 1869 and 1873. This early iron truss bridge incorporates the arched or “bowstring” design features common during the pioneering decades of American iron bridge technology. Built by the Ohio Bridge Company of Cleveland, the Tioronda Bridge is a rare surviving example of an iron patent bridge manufactured by one of the small firms which flourished briefly in the period immediately following the Civil War. The Tioronda Bridge contributed to the industrial growth and physical expansion of what became the City of Beacon. 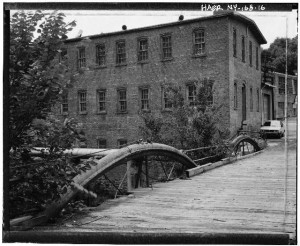 American bridge-building technology was characterized by the use of iron as its principal structural material for a period of approximately forty years between 1850 and 1890. During this time, iron was a transitional material between wood, which had less strength and durability, and steel, which ultimately was produced with greater elasticity and uniformity. Literally hundreds of patents for iron bridges and their components were granted. Many of these bridges, however, were never built and others were either unique or built in limited numbers by short-lived firms. Most of the iron vehicular bridges that have survived were built according to several basic patents controlled by the large dominant manufacturers of the last quarter of the nineteenth century.

The Tioronda Bridge is based upon patent No. 71,868 issued in 1867 to John Glass, George P. Schneider, and William B. Rezner of Cleveland, Ohio. Until the Tioronda Bridge was identified in the spring of 1973, this bridge design was known only from its patent model, now in the collection of the Smithsonian Institution. One other example of the bridge has subsequently been identified: a ninety-three-foot, eleven-panel, single span over Sandy Creek in Allegheny County, Pennsylvania.

William Rezner was a Cleveland physician in his early forties when he collaborated with foundryman John Glass and machinist George Schneider on their 1867 patent. In 1869, Rezner entered into partnership with local businessman Frank D. Stone to manufacture and sell iron bridges under the name of the Ohio Bridge Company. John Glass became the financial patron of the new enterprise. During the business year 1869-1870, the Ohio Bridge Company produced iron bridges having an aggregate length of 3,444 feet and a market value of $86,000. In 1873, however, the firm suddenly ceased its operations and dissolved, a possible victim of the economic depression which began that year. Dr. Rezner soon thereafter returned to practicing medicine, while Stone established a mattress manufacturing enterprise and Glass entered the real estate business.

The City of Beacon was established in 1913, the unification of two adjoining industrial communities, the villages of Matteawan and Fishkill Landing. The falls of Fishkill Creek had attracted water-powered milling industries early in the nineteenth century. Erection of the Tioronda Bridge across Fishkill Creek contributed to the growth of this industrial area, promoting factory development and settlement on the formerly inaccessible east bank of the Fishkill. Because the new mills thereby gained access to the Hudson River shipping, the Tioronda Bridge was an important unifying element contributing to the emergence of Beacon as an industrial and commercial city.

Based on the nomination above, the Tioronda Bridge was listed on the National Register of Historic Places in 1976. A decade later, the bridge was closed to traffic. The bridge was dismantled in December of 2006.

Beacon resident John Fasulo and I shared a passion for that bridge down at Madame Brett Park. Both of us were alarmed when the city started to dismantle it with no firm plans of what to do next. The city administrator at the time wanted to have the bridge rebuilt by the State, but that would have required making it into a full two-lane road, and many felt that was not appropriate.

John took a series of photos of the bridge being taken down, and more photos of the trusses as they were carted away, first to a wall behind my old welding studio, where the Roundhouse condo units are now, then to what appears to be their final resting place at the transfer station, or what we used to call the dump. You can see the serious amount of deterioration that occurred over that time.

John quickly realized the city would not restore the bridge, and advocated having an artist create a memorial to the bridge using the trusses. In later years, due to the advanced deterioration of the trusses, he surmised that any sculpture would have to be created by first grinding up the remains into iron dust.

Here are some of John’s photographs. John Fasulo passed away on May 14 of this year. 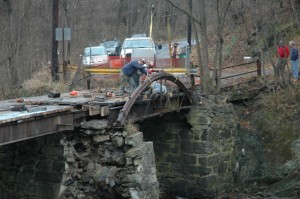 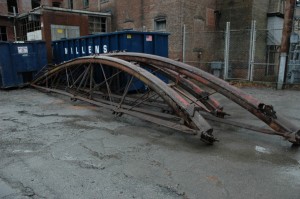 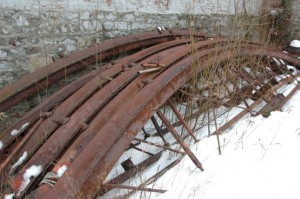 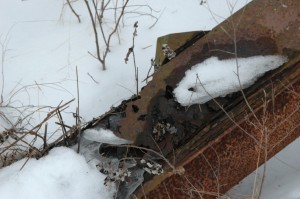 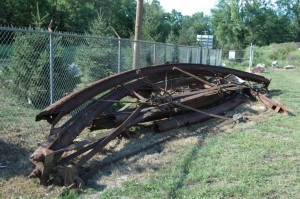 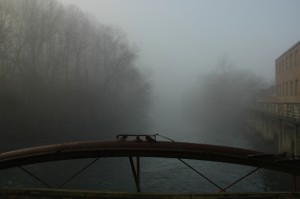 This photo by John is the last taken from the bridge.