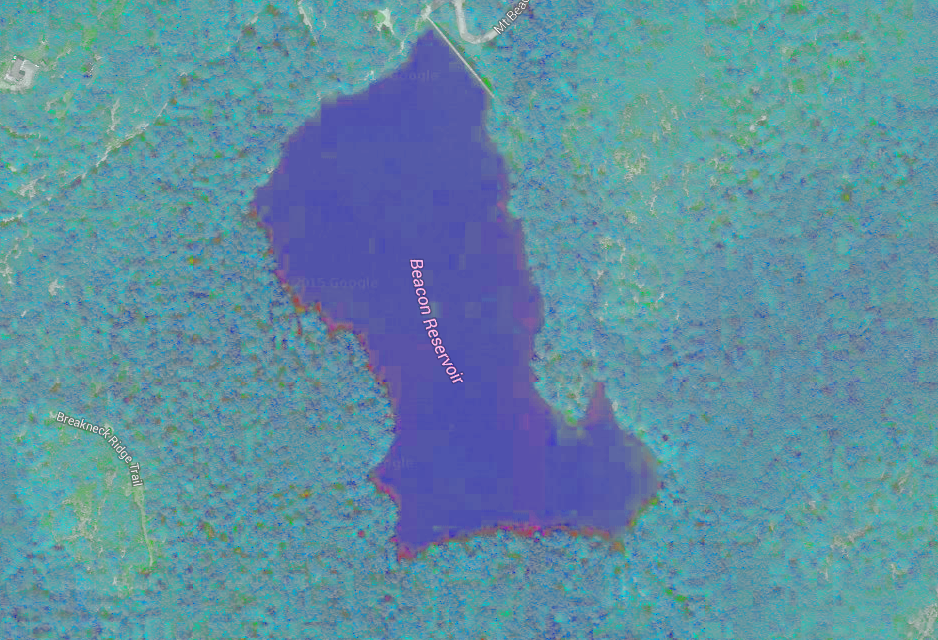 Beacon experienced severe drought conditions last year. The city faces drought conditions more frequently than neighboring municipalities because one of its main water sources sits way above it, in a reservoir at the top of Mt. Beacon. To recharge, it relies on precipitation, gaining water when it rains or snows directly into the reservoir, or the runoff from the ground around it that slopes toward it, known as the catchment area. Because the reservoir sits at a higher elevation than most of the surrounding land, the catchment area is small. 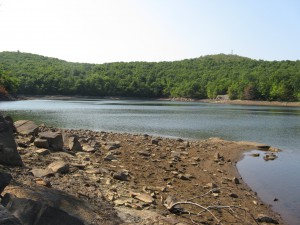 At a Science Cafe put on by the Beacon Institute for Rivers and Estuaries and held at The Hop, 554 Main Street in Beacon on May 19th, a novel, two-birds-with-one-stone possible solution was put forth by Jeff McHugh and Frank DiLorenzo, respectively president and a trustee of the Mt. Beacon Incline Railway Restoration Society. Each year for the past several years the Incline Society works with engineering students from Stevens Institute of Technology. This year students were tasked with redesigning the emergency access road to the top of the mountain.

When Scenic Hudson transferred its acreage at the top of Mt. Beacon to New York State, the price to restore the incline railway shot up. One aspect that the State wanted looked at in greater detail was the access road, which suffers from severe erosion and is dangerous to navigate, as recently demonstrated when a work vehicle went off the road and rolled down a 65-foot embankment. While the Incline Society was meeting with Mayor Randy Casale to discuss the yearly project during the height of the drought, the mayor wondered if there might be a way to get that storm water runoff back up the mountain and into the reservoir. 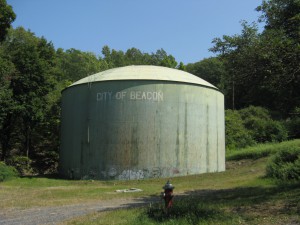 At The Hop, DiLorenzo presented a system that could possibly get that done. The design uses small solar panels and mini hydro turbines to create the power necessary to pump the water from catch basins along the road’s drainage system 800 feet back up to the reservoir during heavy precipitation events. It also has features that would prevent backflow in the event of overcapacity. Rough back of the envelope calculations estimate that the system could potentially double the reservoir’s total catchment area.

Although Wigwam has never been a fan of the incline railway restoration, the idea of sending the water back up to the lake is a nifty one, and the city should be applauded for “thinking outside the box,” as the plaque in the mayor’s office reads. It was also well-presented, with helpful graphics. And just the fact that the city is looking at the water issue is also to be commended.

However, might there be more straightforward ways to deal with this, ways that don’t involve seemingly fragile, vulnerable technology and ongoing replacement and maintenance costs? A more natural approach, that works with the land, rather than against it? Although this plan is fairly benevolent, there is nothing less natural than forcing water back uphill. In fact, that was the concept behind the proposed power plant at Storm King Mountain. 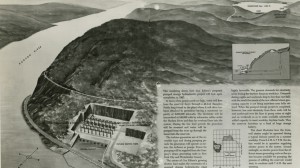 Perhaps, in addition to giving the problem to traditional engineering students (whose new design for the road up the mountain, by the way, calls for it to be paved, an idea that the mayor says right off will never fly), it could also be given to an engineering firm using a more naturalistic approach to water management, or permaculturists who specialize in working with creative water situations. One basic tenet is to slow the water down enough so that it can be absorbed. This approach often uses berms and swales. But sometimes the ground conditions are too degraded. Other potential solutions might be to create new smaller catch basins and ponds at lower elevations, and/or expand existing ones, and guide the runoff to these.

It’s okay not to always try to dominate nature, to force it to do unnatural things. Sometimes we would be better served by figuring out how to best go with the flow, rather than adding another heaping of technology to try to solve problems we’ve created by meddling in the first place.

On another front, we might also look at getting the public more involved in being conservative when the next drought rolls around. Maybe a weekly story in the paper as to what various companies are doing to conserve (Stage I rules mandate each commercial enterprise draw up its conservation plans*; How many did? Somewhere between zero and one is the guess. Beacon went to Stage III before the drought ended.) How about getting school kids involved, letting them see the weekly usage totals go down each week as they implement conservation procedures.

*Each nonresidential user of water from the City of Beacon water system shall prepare and retain a water consumption reduction plan enabling it to reduce its use of water in stages of 15%, 20% and 25% based upon its water consumption during the calendar year. Such plans shall be designed to achieve and maintain a reduction of 15%, 20% or 25% immediately upon the declaration of a Stage I, Stage II or Stage III emergency, respectively. Each such user shall promptly implement the first phase of its plan during Stage I and shall reduce its consumption by 15%. On and after 30 days from the effective date of this chapter, each such user shall have its water consumption reduction plan available at all times for inspecting and copying by employees of the Department.

Beacon is a Dry Town

Stop the Incline or Start the Spur?