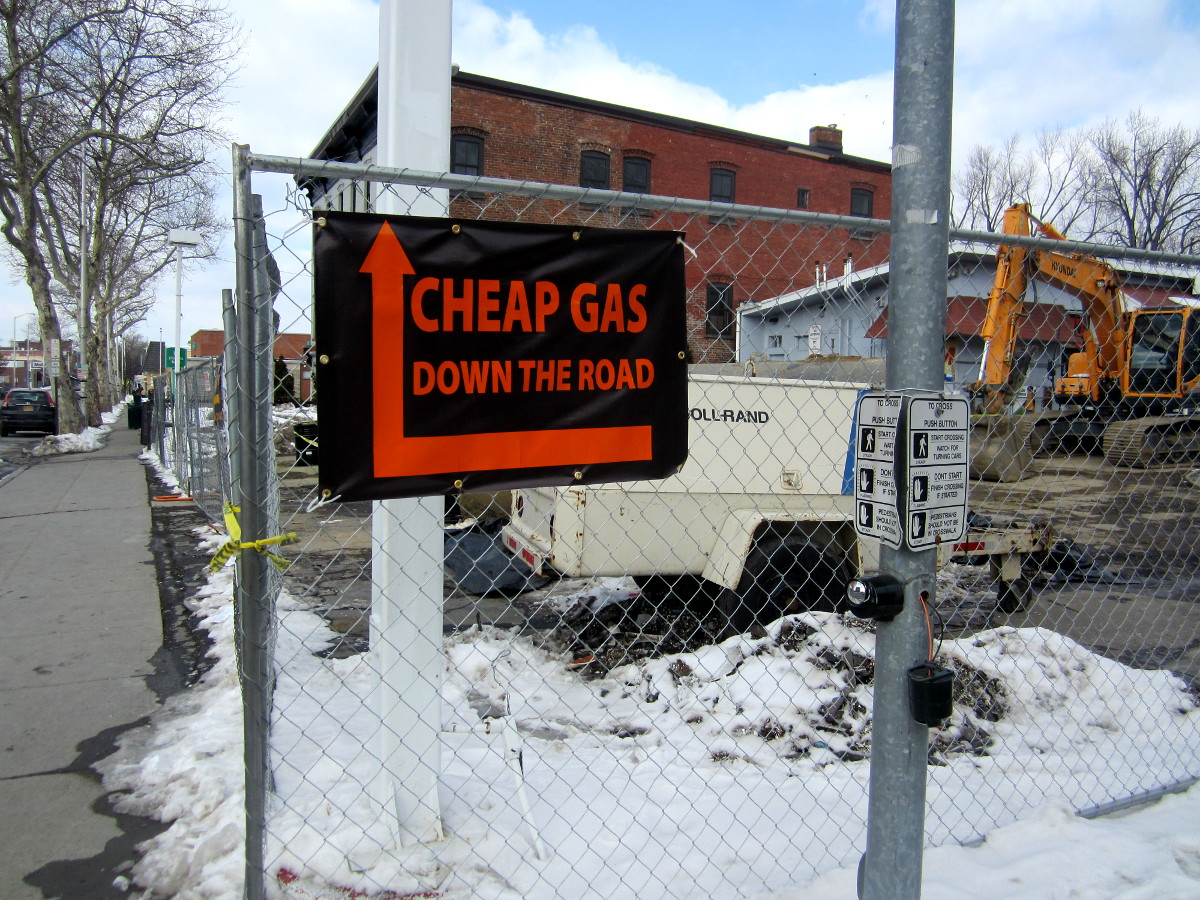 Cheap Gas Down The Road?

This blog is about our local economy. But in 2015, several hundred years after the industrial revolution, our local economy is intimately intertwined with the global economy. In fact, these days virtually nothing we use or consume in our former mill town was produced here. Our Main Street economy mainly consists of selling stuff, 99.97 percent of it made elsewhere.

The biggest sales tax generators in town are the three gas stations slash convenience stores, which sell most of the basic necessities of life: beer, milk, snacks, cigarettes, lotto tickets and gas. (I’m just waiting for one to add pizza and fingernail decorating to create the perfect, fool-proof Beacon enterprise.)

Business is apparently so good that a second Main Street gas station in as many years is undergoing a gut renovation. I refer to the “Gateway to the East End,” Xtrafuel, on the corner of Main and Fishkill Avenue. The Mobil a block away got its facelift in 2013.

Whatever you may think of the beautification of our emporiums of life’s essentials, I’m sure you have taken note of the dramatic plunge in gas prices at our local pumps since June of last year. That is because the price of a barrel of oil has been dropping like a rock.

According to Federal Reserve chief Janet Yellen, this is a good thing. A headline on CNN Money in December read “Yellen: Cheap oil is good for America.” She said it was like a tax cut for American consumers, putting more money in their pockets.

But looking beyond the headline and the feel good phrasing “like a tax cut,” she also said “From the standpoint of the U.S. and U.S. outlook, the decline we’ve seen in oil prices is likely to be, on net, a positive.” Hmmm. When a government official uses a modifier in front of “positive,” there may be reason for worry. What’s on the other side of the “net positive”?

To her credit, Janet gives us a hint. “Yellen acknowledged that the plunge in oil prices may cause cutbacks in the drilling industry, which is likely to slow capital spending for wells that aren’t profitable in the current environment.” The next paragraph tries to bring it back to a positive by throwing in the irrelevant fact that the U.S. is still a net importer of oil. But her statement is loaded, and exploring what it really means will require some background. The short answer is, declining oil prices will not remain a net positive for very long.

The longer answer has to do with Peak Oil, a phrase first used in “The End of Cheap Oil”, a Scientific American article published in 1998. The simple definition of peak oil is that moment in time when the world produces the most oil it ever has, and the most it ever will. Obviously, since oil is not technically being produced, but rather extracted from the ground, there is a finite amount of the stuff spinning along in the dark with us. This  means peak oil is not a theory, but a fact. The concept of sustainability has become quite the cultural meme. It’s a good idea to keep in mind that the end game of unsustainable means no mas.

Getting back to the definition of peak oil, it bears repeating that it is not the halfway point of how much oil is left in the ground, it is the moment in time when we produce the most oil we ever have. When that moment passes, we are on the decline slope of oil production.

So it is a more complex equation than Ron had 100 jelly beans in a jar on his desk. He ate 50 beans, so now he has 50 more to go. As just one example, with oil, we have already picked the low-hanging fruit. Now, to keep up with growing demand and falling conventional oil supply, we must rely on oil that is harder to get–from deep water drilling, tar sands, and, here in the U.S. especially, tight shale oil from Texas and North Dakota.

That harder to get oil comes with a huge cost, both in capital and energy. A well in the Bakken oil fields of North Dakota costs many times that of a conventional well. It also has a much lower flow rate, and production falls off between 50-70 percent after the first year. This means oil companies must keep drilling to keep production rates up. More insidiously, as oil gets harder and harder to extract, more and more actual energy must be used to find it, get it out of the ground, and process it into useable form. That leaves less energy available for the other big partner in this dance–our economy, which is based on an eternal economic growth model–a model that might work in a world with an infinite supply of oil.

As you might imagine, this little jitterbug between oil and the economy is not a good thing. When the geologists who first pointed out the phenomena of peak oil wrote about it, while they understood it was not a linear process, they nevertheless applied a linear result to its effect on oil’s market price, imagining a steady rise until economic growth became too expensive. Since the article first came out, more of the intricacies of the interplay between oil and the economy have been accounted for, and rather than a steady rise in price, the real indicator of peak oil is market price volatility—for example, the crash from over $140 a barrel to less than $40 a barrel in 2008. Prices rose steadily for a while, then plateaued at around $90-$100 a barrel for the last couple of years. Since June, the crude oil prices have been on a downward spiral. As of today, WTI (West Texas Intermediate) was at $48, and Brent  was at $54.

Back to Yellen. The cheaper oil means cheaper gas, so we all have a few more bucks in our pockets, we can drive to Walmart and buy an extra 48-pack of Charmin and a few more cases of Mountain Dew. But all those smaller and mid-size oil companies that have been drilling like mad in the Bakken fields just to keep up with the enormous drilling costs even at $100 a barrel are now suffering. This matters to you and me because all those land leases and all that debt on drilling equipment has been chopped and diced and sold to investors hungry for anything that promises a return, just like dotcom stocks and mortgage-backed securities lit up investors’ eyes during the last two bubbles. To compound the problem, a good chunk of our employment gains during the “recovery” have come from the tight oil boom States of Texas and North Dakota.

A few years of high oil prices causes major world economies to stall, sending oil prices (and a good many other non-renewable commodities, as well as food stocks) way down, and this bubble looks primed to burst, sooner rather than later. A lot of the financial “product” out on all that tight oil infrastructure that, with oil prices cut in half over the last six months, can no longer make the debt interest payment, is turning sour fast. That sound you hear at the pump is no longer cha-ching, but pop. No one can say for sure how this next tumble down the steep decline will manifest, but one thing you can take to the bank—on the other side, it will be the real, physical limits of a, yes, finite planet that will be dictating the shape of our lives much more than the utterances of Janet Yellen, lackey to a dying empire.

But enough of the laws of thermodynamics and the world of ecology. While this concludes our sketchy outline of the oil situation, the question remains, How will all this nonsense affect us here in little old Beacon? Don’t we kind of have a force field up, protecting us from most of this? Aren’t people moving up and businesses opening and house prices rising? You know, NoBro! (North Brooklyn, bro.) Sure, okay. But for fun, lets do a thought experiment and imagine that, at some point, the unsustainable does what’s implied, and comes to an end. Will it be in 2015 that reality sets in? All the warning signs on the dashboard are flashing madly. Maybe we should fasten our seatbelts and review some emergency procedures.

Until further notice, that means going on with the premise of this blog, examining our local economy, and looking at ways we might adapt and become a bit more resilient to the coming changes. We’ll adopt a slightly more strident tone, and touch on the broader issues when it makes sense, but the focus will be on what we can do right here right now. Here is an example: Does it make sense to spend a million dollars of taxpayer money to pave over more land to park cars on? Or could we do something that might prove more useful to us in the medium term, and those who will come after us in the longer term?

I’ll look at ideas for what that useful something might be in an upcoming post, but next up will be another post that has been lying in the draft box (no pun intended this time) the Beacon Beer Grant. Is half a million dollars for a brewery insane folly or potentially inspired genius? Find out next time on Wigwam.