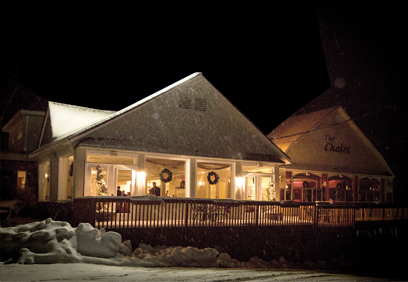 Despite frigid temperatures, an engaged crowd of 125 citizens and public officials convened this evening at the Chalet on 9D, across the river from Storm King Mountain, to provide input on the Hudson Highlands Fjord Trail master plan. Mark Wildonger of Scenic Hudson opened the meeting by explaining that the trail was conceived as a way to bring people from the business centers of Cold Spring and Beacon out to the area’s natural resources, with the reverse also being true—providing an opportunity for those visiting the scenic landscapes to explore the downtown commerce areas. Avoiding the hazards Route 9D presents to hikers, pedestrians, and cyclists was also a driving force for developing the trailway.

Participants marked up oversized maps of the trail. The map shown was broken up into three segments, with four or five groups working on each segment.

Scenic Hudson announced that they were putting up $100,000 toward a “physical part of the trail,” Hudson Highlands Land Trust also donated. A large private donor has put up $450,000 in matching funds. According to Philipstown Supervisor Richard Shea, the rough cost estimate for the entire 9-mile length between the Beacon and Cold Spring train stations was in the neighborhood of $17 million, although it seems apparent this figure could vary considerably depending on the particular routes chosen, amenities, etc.

The main order of business for the night was to break into groups and mark up the large maps on each table with suggestions for routes, ideas for parking, linkage points, etc.A good amount of local knowledge surfaced regarding geographical features, old railbeds, and historical routes. 9D was once called the Shore Road, and it ran around Breakneck Ridge before the road tunnel was constructed, crossing the tracks on either side of the mountain as they emerged from the railway tunnel. Several groups included the path of this old roadway in their suggestions.

The old Shore Road, looking north. The road does not go through the tunnel, which was rail only at this time. Travelers would turn left toward the river, crossing the tracks coming from the tunnel.

Concerns were also expressed by owners of private property along the riverfront. This could present some difficulty in the ultimate vision for the trail, as one of the most hazardous stretches of 9D correlates to the segment with the private riverfront property, and most of the planning suggestions put the trail along the river at this point.

Planners will now take  the public input from the meeting and begin to design various possibilities. A second public meeting is scheduled for this summer.