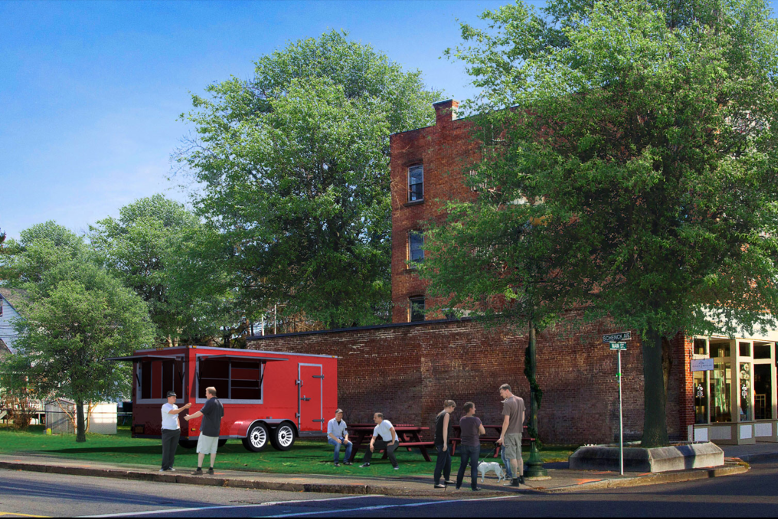 Dalton Edwards bought the empty lot at the corner of Schenck and Main Streets last year, with plans to build a cinema that serves meals, a combination art form that is popular in his home town of Austin. But while those plans are being developed, Dalton and his partner, Josh Venne, thought it would be a good idea to start generating some buzz and a little revenue. So the two Culinary Institute of America graduates bought a food truck in order to set up temporary operations while getting their ducks in a row.

It turns out that Beacon has nothing in its code about street vending on private property, and anything not specifically addressed in the code is prohibited. So the plan now is to appear before the zoning board of appeals on Tuesday, May 20, to ask for a vending permit.

Called The Beacon Bite, the truck would offer simple food with a bit of flair. Though the menu remains under wraps for the moment, all items will likely be under $10. The Drink More Good commercial kitchen just up the street from the lot is set to be the off-site commissary. Dalton expects to target the “after bar” crowd on the east end of town.

Although the mayor is not thrilled with the plan and would like to see revenue from a developed property with a building rather than the tax on an empty lot, Dalton says several city council members support his interim business idea; certainly the argument could be made that having a food truck is better than having an empty lot.

It’s also a proven way for young entrepreneurs and chefs to test their mettle while additional financing is found for the bigger picture. Besides, they’d be bringing yet another Texas-based tradition to Beacon by following in the boots of fellow Lone Star Stater Charles Goodnight, who invented the chuckwagon, a mobile kitchen in a covered wagon that originally accompanied cattle drives from Texas to New Mexico. Yee-ha!