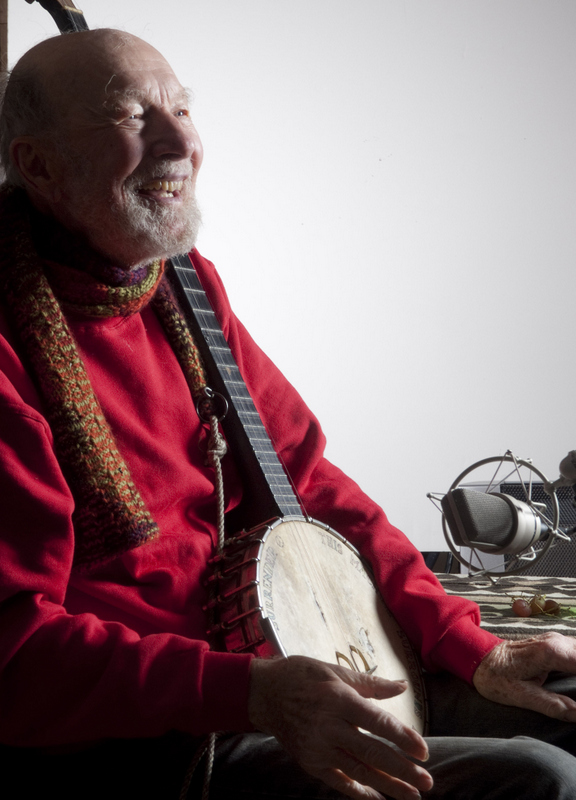 One day not so long ago I walked into Beacon Natural Market and Pete Seeger was sitting at one of the small tables in front and talking to LT, the proprietor. “The runners would carry the ice back to the emperor’s court,” Pete was saying, “where it was flavored with honey.” Pete, a lover of ice cream who would pick up four or five containers at a time, was relating the folkloric origins of sorbet. (The day Pete died, Beacon Natural gave out free pints of ice cream in remembrance. I went with chocolate.) I lingered on the sideline waiting for an opportunity to butt in and ask Pete about his technique for sharpening an ax. I had plans to showcase his honing skills as one in a series of one or two minute home ec video tips—canning, composting, sewing, repair—here on Wigwam.*

When I first moved to Beacon, I did not know Mr. Seeger lived nearby. A customer came into Iron Fish Trading Co, my little second hand shop then located on the east end of town, and pulled one of Pete’s records from a box. He told me Pete was a Beaconite and that I should put the album in the window, which I did.

Before I ever spotted Pete in person around town, I had a one-degree of separation moment when Pierce Woodward, bassist for The Mammals, moved in as my roommate. He had been living in the original Seeger log cabin with fellow band member Tao Rodriguez-Seeger. He once told me about the time he came home late from a gig and crashed on the couch. Some time later he awoke to the sound of his name. When Pierce opened his eyes, Pete, who now lived across the way in a newer, bigger cabin with running water, was standing over him, wearing boxers and holding an ax. “C’mon, Pierce. Let’s chop some wood.” Pierce passed on that occasion, but once Pete did get him to help with the removal of some tree branches that were threatening utility wires on the property. While he feared for both their lives, Pete was nonchalant.

A little over three years ago I got a call from the musician and producer Jeff Haynes. I was editor of Hudson Valley Life magazine (now defunct) and he pitched me a story about a project he was doing with Pete Seeger. The publisher was lukewarm, because the magazine had done a feature on Jeff two years earlier, but I convinced her that this was a unique story. He had been recording Pete telling spoken word stories for the past 18 months, then setting them to a variety of different music from artists around the world. “Pete and Jeff Tell A Story” was our cover feature for the December 2010 issue of HV Life. The project Jeff created is called The Storm King.

Standing next to LT and Pete in the market, I don’t recall how I made the segue from the origins of sorbet to the question of how to sharpen an ax, but Pete told me about a kind of woodsmanship course that was given at his school, in lieu of gym, if I remember correctly. He went on to say “Humans love to swing things. We swing cricket bats and tennis racquets and golf clubs. We love that swinging motion.” I was tickled to have gotten such an original, interesting quote about chopping wood. I had to chuckle when, a few days ago, I read an interview with Pete from some years back that had him saying almost the identical thing. Like I was the first guy to ever ask Pete about his well-known woodchopping habit. 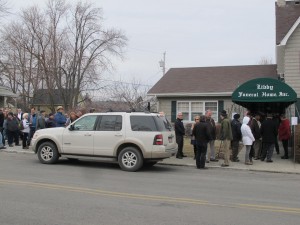 A funeral for the public was held on Sunday, February 2, in Beacon, at the Libby Funeral Home.

There are a couple of reasons Pete Seeger came to be important in my life. One was simply pride of ownership, like rooting for the home team. Yeah, man. Pete Seeger lives here. Dude is 90-something and still chops wood every freakin’ day. He kicked ass at the House Un-American Activities Committee hearings, you gotta read that whole transcript. Saw him at the Strawberry festival last month. He gets his ice cream at the same place I do.

He was a man of indomitable principles. The sentiment that best expresses my feelings is from Joan Baez, who said “I believe that courage is the most vital of human qualities, and that taking risks is essential to making serious social change. Pete courageously took the risks and paid the price. He remained a moral compass for this society through fiercely challenging times, with his music, his songs, and with enthusiastic perseverance.”

In my view, he was someone who recognized not only the power of storytelling, but the power of taking actions on a human scale. Don’t just be a passive consumer of industrially produced and distributed music, sing along! Don’t just read about the environment and its degradation, get on a sailboat and experience it firsthand! Don’t just talk about peace, grab a sign and let the world know! Don’t just take a mortgage out on a ticky-tacky little box, grab a double bit ax and build your own! He even pulled off the seemingly impossible trick of being a human-scaled international celebrity.

Thank you, Pete. My condolences to the Seeger family.

One thing I’m sure Pete would be upset about is the plan to create a bigger port in Albany for transferring shale oil brought in on tanker rail cars from the Bakken fields in North Dakota to barges that will then travel down the Hudson River. I spoke about this new development at the Beacon Sloop Club meeting in January. From the Riverkeeper website:

Global Partners, one of the largest petroleum distributors in the Northeast, already has the capacity at its Port of Albany terminal to offload two trains daily, carrying a total of up to 5 million gallons of Bakken crude. It wants to expand its facility’s ability to transport thick, heavy crude oil on the Hudson River by installing up to seven boilers that would heat entire train cars to help tar-like oil flow from train car to river vessel.

Riverkeeper is starting a campaign called #NotOnMyWatch. There will be a public meeting in Albany on February 12 about the proposed oil port expansion.

*For several reasons, I never did get around to asking his family if I could schedule a short video shoot with Pete while he sharpened his ax.