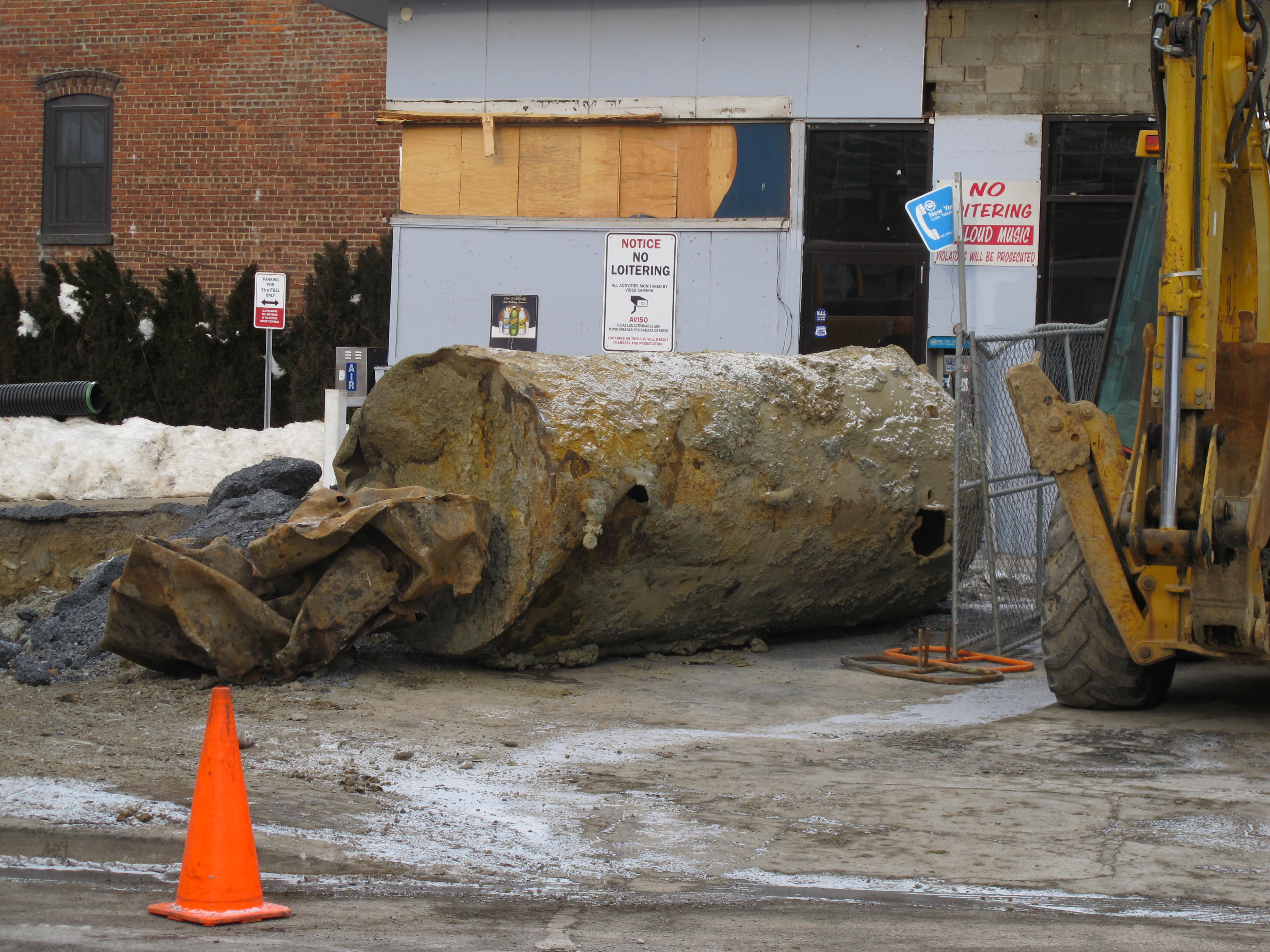 Update on the gasoline leaking from the underground storage tanks at Main and Fishkill Avenue: Removal has continued after a delay due to too much moisture in the soil. Truckloads of contaminated dirt are being hauled to an approved facility in Albany. Still no word on the extent of the contamination, but at this point it appears they are backfilling some of the site with clean fill.

Several Wigwam readers have raised questions about my coverage of the leaking gasoline storage tanks in the middle of town. One implied I had insinuated there was something “nefarious” about the whole affair, and that my coverage was alarmist, while another took me to task for using what he felt were incorrect terms to describe what was happening.

In terms of human behaviors and motivations, there is little reason to suspect any nefarious activity. I met the owner the other day while taking a few photographs, and he is probably more bummed than most of the rest of us. As we first reported, the leaking tanks were not the current tanks, but ones that had been previously abandoned that those on hand for the dig were not expecting. And I don’t think my tone could be construed as alarmist—in fact, at the time I was more interested in using the leak as a jumping off point to talk about our hypocrisy when it comes to environmental issues.

The commenter who told me I was clueless said it was a petrol spill, not a leak. And yet, in 1980s, the Environmental Protection Agency came up with a lovely name for the very type of situation we are experiencing here in downtown Beacon: Leaking Underground Storage Tanks, aka LUST. Yeah, baby. 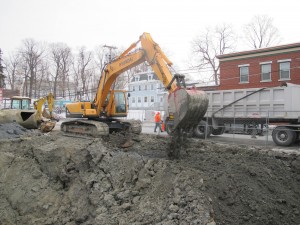 This same commenter wrote: “Yes it isn’t a good thing that a spill happened, but they happen all the time everywhere.… It’s a risk of being in the petrol business.” I can’t argue with that. In fact, Beacon is two for two when it comes to leaking gas station tanks–the Mobile station ran into a similar problem, though apparently not as extensive, when it was undergoing renovations several years ago. I suspect that may have something to do with why the beautiful pines along the side of the post office were cut down.

Scenic Hudson is also in the process of “remediation” (love that word, so handy!) down at the riverfront, where not long ago all kinds of oil was allowed to leak into the ground. In this case, it has been determined that the safest, least expensive thing to do is bury it further. This area is just to the north of the kayak facility; Scenic Hudson already remediated the soils under Long Dock Park, which had toxins from a salvage yard, a major oil storage facility (MOSF), pesticide and herbicide manufacturing, and other industrial uses.

Also locally, we still have huge oil trains passing along the Newburgh riverfront on a regular basis. The oil industry is pushing back on proposed regulations requiring oil tanker cars that can handle the volatile crude from the Bakken fields in North Dakota. 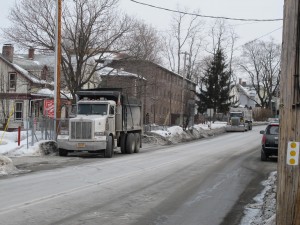 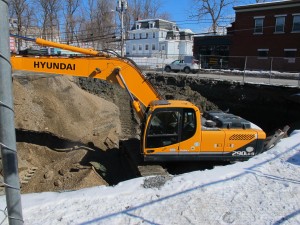 Nationally, although President Obama vetoed the Keystone XL pipeline, it’s still possible that this pipeline down the middle of the country could be built, as the permit itself has not be rejected, leaving the door open for another assault by the oil industry. Then there are the major spills in the world’s waterways that we hear about, and the smaller ones we don’t.

So yes, I get that as a society, we long ago made the choice to go all in on a fossil fuel-based civilization, and that comes with risks. But when you stop to think about it, which we rarely do, there’s a lot to that little sentence, “It’s a risk of being in the petrol business.” For instance, who really ends up bearing the brunt of those risks? And  how long can we afford to go on “remediating” and “mitigating” and “regulating” these risks? And is it wise for us to blindly assume that in the end, “they” will make sure the manifestations of these risks are taken care of?

My reader writes: It’s usually trusted private remediation companies contracted by the state to do the sampling, soil extraction, and tank pulls. ….We have methods of cleaning this up that work.” [Note: actually, as I indicated in an earlier post, according to town officials the DEC is involved in monitoring American Petroleum, the private contractor, in the cleanup process.] 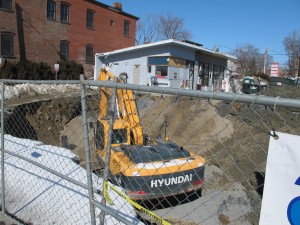 I sympathize with this point of view—it’s certainly a comforting one, and one that we’ve all been indoctrinated with as members of the Industrial Western Civilization. It’s an unwavering faith in science and technology, in the belief that things always progress in the direction of improvement and betterment for all (or at least for us, all can come later.) Unfortunately, constantly running around spending huge amounts of capital and energy cleaning up messes caused by our use of fossil fuels is the definition of unsustainable, if only for the simple reason that, as extraction of the energy itself consumes more and more of our capital and energy resources, there will be less and less left over for the metaphorical rolls of Bounty to clean up the external costs. For example, the LUST fact sheet linked in the third paragraph above states, “The U.S. EPA released The National LUST Cleanup Backlog study in 2011, which reports that ‘sufficient LUST Trust monies are not available to address all eligible sites.’” Also note that the fund itself is due to expire in September 2016 (though it has been extended in the past.)

These external costs are to be found in every realm of industrial society—a good example from the financial “industry” is the bailout of the big banks in 2008. By not accounting for these external costs, we rig the books and fool ourselves that  industrialization, with its large scale production process, is cheaper and more “efficient.” Thus a cauliflower from California is cheaper than one grown organically on a local farm. That is, until you start factoring all the costs, which at this point may even include the costs of an anthropogenically-induced megadrought. Hmmm, let’s check the savings account…

As technologies grow more complex and more “improved,” more and more of the costs have to be externalized, shoved onto society, the environment, and the economy, in order for these technologies to appear to remain affordable to consumers and actually be ever more profitable to the increasingly small sector of society that reaps the benefits of the outsourced costs. At some point, of course, this little accounting trick doesn’t work any more. If you “read the paper” with even a modicum of discernment, it’s hard not to agree we are fast approaching that point, with no foot on the brakes.

Meanwhile, all the so-called grown-ups in the room also seem to be more preoccupied with keeping the juggling act in the three-ring circus known as the global financial system from crashing to the ground, or starting World War III in a place we have zero business meddling. But Wigwam is not about national politics, or even the “collateral” damage done to the environment due to fossil fuel use except where these things intrude into our little neck of the woods. (Sorry about all the “quotes”, hard to avoid when you’re in Newspeak land.)

It is, however, useful to understand the importance of the mindset that there is a “they” out there, experts operating the complex machinery of industrial civilization, who are guiding us on the ever-upward path to more and better, forever. That’s a topic for another post. In the meantime, I’m going to take back a bit more of the trust in companies, the faith I have tied up in the global juggernaut, and distribute it locally, to myself and my neighbors. To put it another way, it might be a good idea, as the proverbial chickens head home to roost, to start raising some real ones in the backyard, or at least make friends with a neighbor who has a hen house… 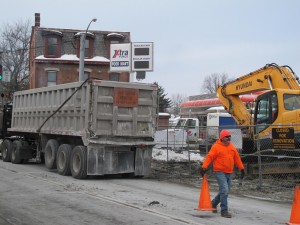 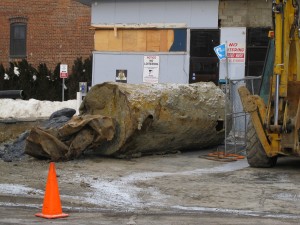