New Parking Lot for East End On the Table

The final item on the city council workshop agenda last night was a discussion of a new municipal lot just off Churchill Street on the east end of town. The mayor announced that the county is interested in a designated park and ride area within Beacon, and city and county officials will explore the idea of using the potential parking lot as its location.

The site under consideration is part of the old auto junkyard, just off Main Street on Churchill, on the left when heading south, directly behind the old Matteawan Railway building. The city currently has a bond out for approximately a million dollars to cover purchase and construction of a 90-to 100-space lot. If a deal can be worked out with the county, the city would only pay for the land. 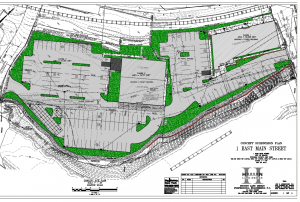 A proposed layout for a parking lot off Churchill, near the creek. Click to embiggen.

View Larger Map Parking lot would be to the right of this view. Click the Look Right arrow to see the actual parcel.

When We All Rode Together

Meanwhile, over at the Howland Center, a slide presentation at the Beacon Historical Society by president Bob Murphy covered the creation of the Citizens Street Rail Company in 1892, only about five years after the first streetcars in the country were installed in Richmond, Va. Beacon was the first city between New York and Albany to get a system. The tracks were laid from the ferry terminal to Spring Street in seven weeks, connecting the town of Fishkill Landing with Matteawan. In the first year, 175,000 rides were sold, at a nickel a ride for the seven and a half minute journey through town. Jealous Newburgh residents could take the ferry, go for a ride around Beacon, and back to the other side of the river for a quarter. 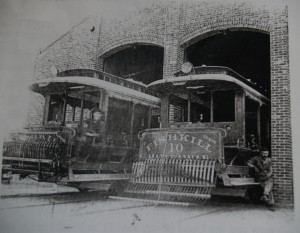 The line was extended out Washington Avenue to Groveville six months later, to an amusement park built to take advantage of the new transportation system. When that went defunct a few years later, that portion of the track was taken up and re-used, laid out to bring the line to the new Mt. Beacon Incline Railway, opened in 1902. Passengers could disembark at the Beacon riverfront by rail or steamboat, then take the streetcar right to the base of the mountain and hop on the funicular. Also around that time the line was extended into Fishkill, with rides costing a quarter. There was a gentleman in the Howland audience who recalled putting soda bottle caps on the rails, to be flattened by passing streetcars and used in the pastime of pitch penny. The last streetcar ran in Beacon 84 years ago, in April of 1930. We are working with the Historical Society to present the slideshow on Wigwam.

Also on the agenda was the discussion of allowing uses other than building structures on privately owned Main Street lots, in particular the idea of mobile food trucks. With city vending permits being confined to public spaces and no provisions for this type of use in the zoning, the council will look into an amendment. Issues to be discussed at the next workshop will include sunset clauses, whether the food truck needs to be owner-occupied, how many trucks permitted on a lot, and how this useage will affect the tax on the parcel.

The city also announced that it is issuing a request for proposal for a bike rental concession at the riverfront. In addition, there was discussion of the 244 Tioranda development project in the Fishkill Creek zone, which got rather animated over cost/benefit analysis and the metrics used to determine whether a development project is a “net positive.” With a number of large projects in various stages, the underlying issue here seems to be, What will all of this potential change mean for Beacon? Does it fit with our existing comprehensive plan? Perhaps more importantly, is the plan still a useful guide, or or is it time to revisit some of the tenets put forth in this document, now a decade old? All the items on the agenda will be fodder for future posts here on Wigwam. Thanks for reading!