Warning: Declaration of EM_Tickets_Bookings::get_default_search($array = Array) should be compatible with EM_Object::get_default_search($defaults = Array, $array = Array) in /nfs/c01/h01/mnt/13167/domains/wigwameconomy.com/html/wp-content/plugins/events-manager/classes/em-tickets-bookings.php on line 7
 Newburgh-Beacon Bridge Closed Without Warning | 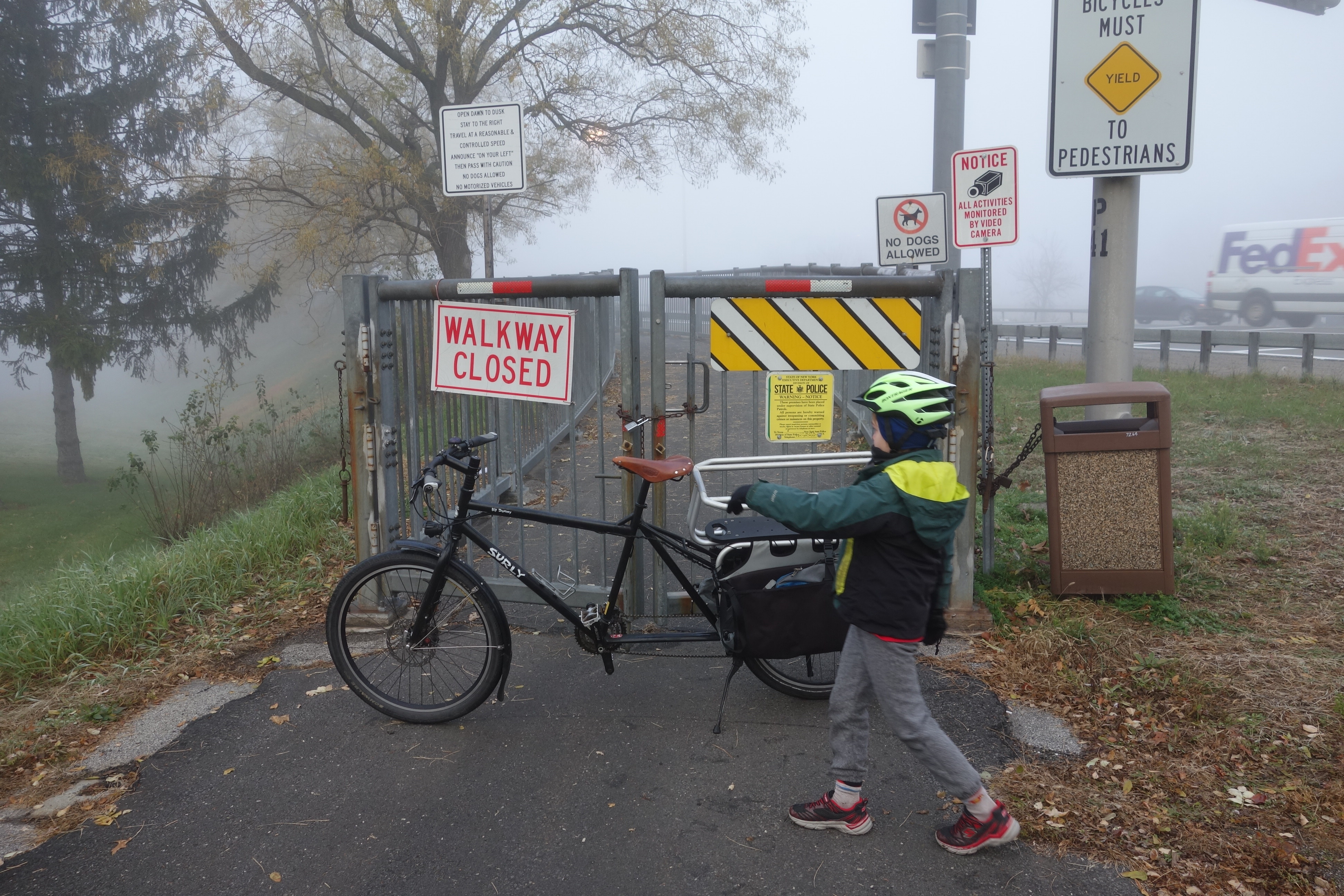 The Newburgh-Beacon Bridge  was closed one day this past December with no warning. It was 8:30 on a foggy Monday morning, and I was transporting my son to his bus stop, then heading to work. But when I arrived at the bridge, the gate was locked.

The only possible explanation for the cyclist/pedestrian crossing being closed would presumably be the fog. Can someone explain the logic of closing a travel lane where speeds average 3  to 15 mph, with very light traffic and gross vehicle weights under 50 pounds, while directly adjacent you have multiple lanes of  traffic doing 50 mph or more, including tractor-trailers, including drivers texting and eating donuts and sipping coffee?

It’s the same fog. If it represents a danger to walkers or bicycles traveling at low speed, no doubt it is at least equally dangerous to motorized traffic. It’s not like someone is going to bicycle off the edge—there is a railing provided. 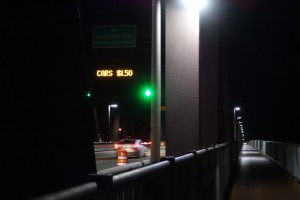 The walkway is well lit during its evening hours.

To its credit, the Bridge Authority changed the hours of operation last spring, from dawn to dusk to dawn to “2100 hours,” aka 9p.m., a move that Wigwam had been advocating. However, arbitrarily closing down the walkway with no notice continues to treat it as simply a recreational path rather than a true alternative transportation option. It really should be very simple: if conditions permit the main roadway to be open, the walkway should be open.

This would include snowy and icy weather. While it’s true that many commuters will find other means when there are reports of wintry weather on the way, not everyone has that luxury. The walkway should be cleared and sanded in a timely manner, just like the roadway. 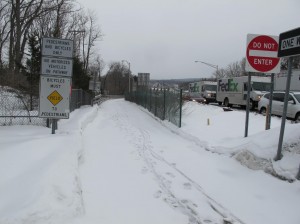 Long after roadways are cleared, and sometimes even after the walkway is addressed, this section remains full of snow and ice.

It is never clear what you will find, or which parts of the sidewalks, ramps, or bridgeway will be accessible. One thing is certain, the infrastructure for pedestrians and cyclists is maintained long after the roadways have been cleared. 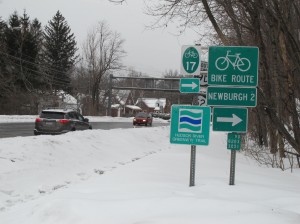 It appears that more than one jurisdiction is responsible for the various sidewalks, ramps, and paths. 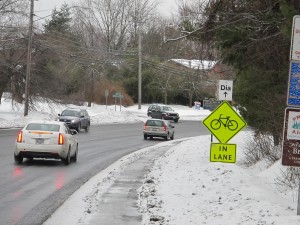 Sometimes the sidewalk will eventually get plowed, but not the last 50 feet or the rampway.

There is also the matter of the approach to the walkway itself. Last year this “on ramp,” an asphalt pathway from the sidewalk on 9D to the bridge walkway gate, was only intermittently and poorly maintained, with large patches of ice remaining throughout the winter, even when the walkway itself had been plowed and sanded. Similarly, the sidewalk along 9D was poorly cleared. (Although there is a sign alerting motorists that cyclists can occupy the center of the roadway, that particular stretch is often a gauntlet of motorist harassment, from behind and even going in the opposite direction. In wintry conditions, it is generally more prudent to take the sidewalk, perfectly legal on this roadway, though not without its hazards—which is why cyclists are really supposed to be on the road. It also appears to fall under more than one jurisdiction, and sometimes part of it will be cleared while the rest is allowed to languish.

Finally, the Bridge Authority needs to fully commit to the new 9 p.m. closing time (and consider extending it in the summer), by installing updated signage with the new hours and publicizing it in the local media. If the bridge is to help facilitate alternative transport between the cities of Newburgh and Beacon, it needs to be viable, and reliable. How can it grow if commuters are prohibited from crossing without good cause, or the new hours are not posted anywhere?

Newburgh-Beacon Bridge to Close for a Month