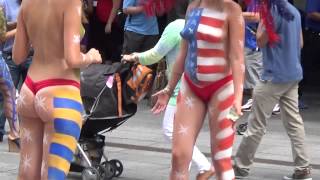 A few years ago it might have been called synergy. But it was just a matter of common sense, according to Beacon Mayor Randy Casale, who received a quick ring over the weekend from his New York City counterpart, Mayor Bill de Blasio. “He had a problem to solve and he saw a great outside the box solution,” said Casale. The Beacon head honcho said De Blasio was perusing the Facebook feed of a niece who moved to Beacon recently to start an organic restaurant for canines and their human friends when he saw the postings regarding the yarn bombing war going on here. “His mind immediately started to churn,” says Casale. “Why not have these folks ‘yarn bomb‘ the painted ladies of Times Square? It’s a win-win.”

This would not be the first time Beacon has provided its manufacturing expertise to the big city. The Green Fuel Economizer Company was cranking out large fans for air shafts in apartment buildings as far back as the early 1900s, and many of the bricks for the Empire State Building and other structures were made at Dennings Point Brick Works. Not to mention hats.

It was too early in the process for comment, according to a spokesperson from DeBlasio’s office. Currie Artemis, representing the Yarners, would only say that it was an interesting proposal, and the knitters were discussing whether to pursue a per stitch or per hour payment arrangement. No word yet on how the  “bombs” might be applied, though some wags have suggested hiring the cartoon characters also plaguing Times Square. “Give them some honest work instead of harassing small children and their parents for tips all day,” said one anonymous source. “Although in the end, it might be Wall Street that needs its ass covered, not Times Square.”

It has also been reported that the Beacon Old Boys, in an effort to improve their “likes” on Facebook with a humanitarian gesture, have stepped up to volunteer to strategically apply the “bombs.” This could not be confirmed at press time, though Adam J-J, leader of the Old Beacon faction in the Dummy Light War, was excited at the prospect. “Some of our fellas have never been to the big city.”