I don’t know the words to many songs, but this one would take a frontal lobotomy to remove. Many have covered it, but Dean Martin’s version from 1959 is extra special. Happy Birthday, Rudolph! (Although 75 is positively ancient for a reindeer, he’s a babe in the woods compared to another famous savior, Jesus, who will be 2,014 years old tomorrow.)

I had to work this foggy Christmas Eve day, but I am no Rudy, and in any case, by law my red glowing light must be in the rear. I did close up shop early, and took a few pictures as I made my way back across the Beacon Newburgh bridge. Normally this time of year I have to take the ferry home, as the bridge’s bike/pedestrian walkway hours are “dawn to dusk,” a timeframe my employer does not recognize or honor, even during this season of long dark nights.

While there is still plenty of time to enjoy evenings with a supersized book by the fire or a ferry trip across the darkened Hudson waters, the light is coming. Just before and after the winter solstice, the sun loses a bit of momentum, but right around Christmas it starts picking up speed again, beginning a swing here in the northern hemisphere from southeast to northeast and on toward the lingering daylight of summer.

The idea of most work ending at dusk, especially in winter when it favors the worker rather than the workee, has its appeal. However much they flicker or dim, that is not likely to happen while the lights of industrial civilization are still on, so in the interest of self-interest, Wigwam has made initial overtures to the powers that be to try to get the policy changed from one that treats the bicycle-pedestrian walkway as a recreational luxury to one that recognizes its importance for the growing number of people who choose walking or cycling as their method of transportation. It will be a priority project as we head into 2015. Stay tuned.

Click on a thumbnail to start the slideshow. Then click the x in the upper left corner to return to the blog. 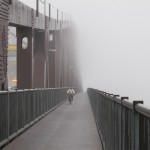 A fellow traveler heads toward Newburgh. 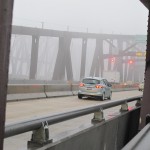 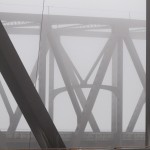 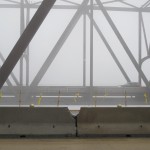 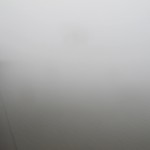 The Beacon shoreline is invisible without Rudolph’s glowing schnoz.

2 Responses to One Foggy Christmas Eve