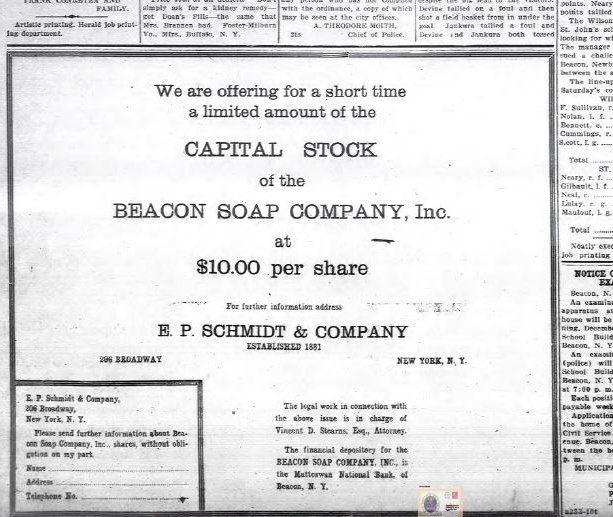 My family is long past the mega gifting holiday scenario, so I decided to buy soap for everyone this year. Conveniently, my local soap shop, SallyeAnder, at 1 East Main Street in Beacon, is a couple hundred yards from my back door. My son Mack and I headed over the Sunday before Christmas and spent some quality time sniffing baskets full of variously flavored soaps. Mack’s favorite was Candy Cane. (Remember when washing a kid’s mouth out with soap was a thing? You know, to get rid of dirty talk? With ingredients like goat milk and green tea and citrus and oatmeal and coffee and chocolate and mint, I imagine that threat is not quite as unappetizing these days.)

It turns out I got as well as I gave, and ended up receiving a few bars of soap myself—it was a veritable soap exchange. Like SallyeAnder soaps, the ones I got were hand made or small batch, and a couple were locally produced.

Soap is so popular in the Maker category on Etsy that you can buy not only hundreds of different soaps, but bulk soap-making ingredients, soap bar cutters, soap molds, and soap stamps, as well as t-shirts with soap maker “jokes” like I Make Soap Because People Stink and Soap Making Is Just Like Baking (but don’t lick the finger), and I Used To Be Addicted To Soap, But Now I’m Clean. I guess that last one is for ex-makers? Or just dumb.

In the United States, prior to the late 1800s, soap making was primarily a household chore. Madame Brett probably made her soap using lye extracted from fireplace ash, which was then combined with pig’s fat. Getting the strength of the lye just right was sometimes an issue.

By the time World War I rolled around, soap-making had become an industrial process using kettles that were three stories high. In the 1930s, Proctor and Gamble invented the continuous process, that allowed for large scale soap-making from beginning to end in less than a day. The company spent so much money on radio advertising around this time that the shows became known as soap operas. 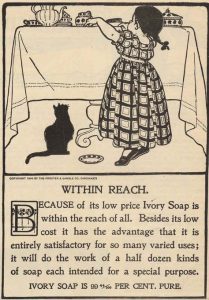 It sells about 120 million bars a year, or more than twice the amount of Dial, the second-place brand. A recent figure for SallyeAnder claims 1,000 hand-made bars per day, which is roughly a bit north of a quarter million bars a year, assuming they give the soap maker weekends off.

For you vegans out there, Dove uses tallow in some of its soaps, as well as synthetic surfactants. SallyeAnder uses more natural ingredients than the industrial soap makers. The company started in the Austin family garage in Minetto, NY in 1982 and moved manufacturing to a building on West Main Street in Beacon over four years ago.

SallyeAnder is not Beacon’s first soap company. In the early 2000s, two local women ran Deep Steep, a beauty product business they founded, from a storefront on Main Street. It was the company’s main headquarters and distribution warehouse, but the soap itself was made elsewhere. Before that, back in the Roaring Twenties, The Beacon Soap Company, Inc. made “Fine Soaps, with Advertisement or Decoration in color Outlasting the Soap.”

It was the brainchild of local entrepreneur William Hamberger, who invented a process that inserted pictures and text into the soap. The company got a name for itself during World War I with a big order featuring the Knights of Columbus emblem.

The Beacon Soap Company, Inc., factory was originally located at Long Dock, just down the road from where SallyeAnder cranks out the cakes today. In 1924, the company received an order for a total of 400,000 bars, its largest up to that time, from “one of the biggest brush manufacturers in the east who sell their goods by the house to house agent method.” The Beacon NY Herald was being coy, but chances are high these bars were for The Fuller Brush Company, based in Hartford, CT.

Not only did the soap promote the client, it also promoted Beacon, according to the paper. From the article:

“Mr. Hamberger also stated that in addition to the customers advertisement on each cake, the name Beacon Soap Company. Beacon. N.Y. is applied to every cake, which means quite a good deal of advertising for our city, when it is considered that several hundred thousand cakes of soap are shipped during the year to people in all parts of the country.” 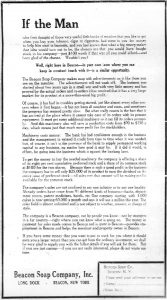 One of a series of ads run in the Beacon Herald to sell stock locally in the Beacon Soap Company, Inc. in an effort to by more automated machinery. Click to embiggen and read!

Around the same time, in an early form of crowd sourcing, Beacon Soap ran a succession of various ads pitching the opportunity to buy stock in the company. There is little mention of the business after this time period, though the factory did move at one point, to somewhere near the old Matteawan train station. Did its bubble burst and come back to Earth during the Crash of 1929? It appears to have hung on in some form until at least the early 1930s.

You can get a 10-pack of 4-ounce Dove bars for $10.88 from Walmart. A 5-ounce bar of SallyeAnder hand made soap is $8. That seems like a lot, especially if it’s for yourself as part of your regular toiletries. A couple of things to think about, though. A pound of hot dogs at Barb’s Butchery is $10.99 (Spring 2017 price) . A 16-ounce package of Bar S Classic Jumbo Franks at Walmart is $1.16. If you like good beer, a 4-pack of 16-ounce cans of An Outstanding Contribution To The Historical Process from Hudson Valley Brewery is $20; a 30-pack of 12-ounce cans of Bud at Walmart is $19.98. (That’s a Great Name for A Beer is the new That’s a Great Name for A Band.)

The way SallyeAnder is made also makes it last longer than industrially produced soaps. To make it last even longer, I take half as many showers. I could theoretically cut even further by taking them for half as long, but my hot water runs out pretty quickly as it is. For that special time in between, I use the SallyeAnder Deodorant Stone. (I’m not sure if the company makes this product here in Beacon, but it works great! Or at least I hope it does.)

Hand made soaps from SallyeAnder are also more pleasing to use, visually, tactically, and smell-wise. The fragrances come from natural ingredients, and stay strong. But only for the bathing experience–the scent doesn’t cling to you like cheap cologne.

The Etsy t-shirt that proclaims soap making is like baking isn’t far off the mark. It’s not a coincidence that many of the products favored by “makers” are ones that can be cooked up in your own kitchen, like beer, bread, soda, candy, and fermented foods. A lot of these processes were preserved and published in book form during the 1970s. One of my Whole Earth Catalogs from that time lists titles like Make Your Own Soap! (Dolphin Books/Doubleday, 1974; $1.95 postpaid), and Soap, Making It, Using It, Enjoying It. (Workman Publishing, 1972; $2.45.)

By offering a product that is superior to the industrial equivalent and often locally made, a smaller business has a chance to find a niche. In some cases, the objective of these companies is to be acquired by a major company. If the goal instead is to remain  smaller-scale, is it possible for a regionally made batch soap or beer to compete as a basic staple, or will these always be luxury or gift or specialty items for most? Does this even matter in terms of benefit to the local economy?

Certainly these companies provide at least a few jobs, and spend some of the profits in the community. If at some point it starts to become less economically viable to import things like soap from places like Argentina, Australia, Brazil, Canada, China, Egypt, Germany, India, Indonesia, Israel, Ireland, Japan, Mexico, Netherlands, Pakistan, Philippines, Poland, South Africa, South Korea, Thailand, or Turkey, it might become even more important. Meanwhile, if someone is making good soap here in Beacon, I’m going to buy it if I possibly can. And I wait with bated breath for the collaboration between SallyeAnder and Hudson Valley Brewery. Sour IPA Suds Bar, anyone?