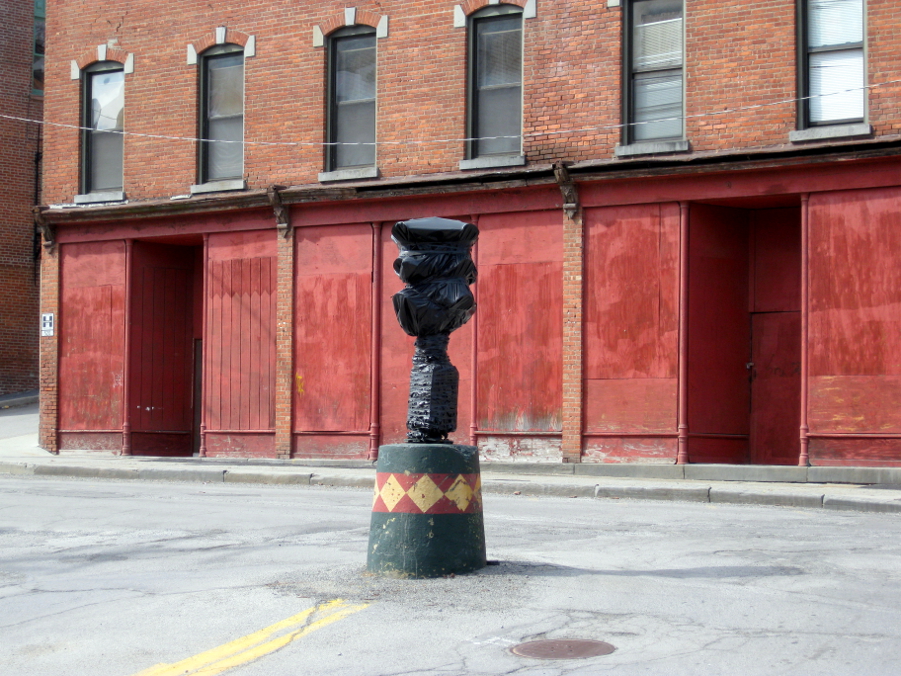 The Beacon Yarn Bombers claimed another victim in what is being called the Dummy Light War here in this small former mill town 60 miles upriver from New York City.  Part of the escalating conflict between so-called  “new” and “old” Beacon, the attack was initiated late on a Saturday night outside of Joe’s Irish Pub on Main Street. “We waited until the final moments before closing,” said Justin C., a member of the BYB third division, colloquially known as the North Chestnut Knitters, which claimed responsibility for the attack.

The victim was fumbling for the keys to his large diesel pick-up in the parking lot behind Joe’s when the elite NCK unit grabbed him and quickly “cocooned” him. This practice involves placing the victim into a tightly knitted body wrap, with only a small opening left for the face to be exposed. The cocoon is usually then left hanging in a public place where “newbies” often gather, and the “old Beacon” victims, wrapped in organic and colorful yarn, are subjected to high levels of embarrassment.

This latest cocoon, consisting predominantly of bright purples and yellows in a variegated band pattern, was found strung up outside the Sloop Club Sunday morning when people began arriving for the farmers market on the ferry dock.

“Let me just say, we are for peace, not escalation of this conflict,” said the yarn bombers leader, Curry Artemis. It is believed last night’s operation was in response to an incident earlier in the week, when a Beacon Bicycle Delivery rider transporting a shipment of organic vegetables was “coal-rolled” by a BOB truck (Beacon Old Boys, mountain division), a practice that involves modifying a diesel engine so that it can emit large thick clouds of smoke at the press of a button. “I had to throw out my contacts, and my asthma got aggravated,” said the unidentified victim, who refused treatment. “But let’s put it in perspective. It was not like I ate an entire loaf of bread full of gluten or something.”

In addition to being for peace, Artemis stressed the locavore nature of the BYB weaponry. “All of our rope is made right here in Beacon from hemp grown in New York, and the yarn is made using wool from sheep that live within a 50-mile radius of city hall, and is hand-colored using non-toxic, sustainable, natural dyes.”

When contacted about this apparent retaliatory attack, the BOB leader, who uses the nom de guerre Adam J-J., just rolled his eyes and smirked. “These people are just too dumb. Have they not seen the price of diesel lately? Drill, baby drill. Saudi America! They’ll run out of sustainable local fiber long before our last drop of diesel is burned. Dummies.”

On another front, The Hop reported that all its artisanal kegs had been switched out and replaced with Budweiser the same day a large party reserved the back room for a pairing event. Many of those in attendance were suspected sympathizers of the Yarn Bombers. The switch was discovered almost immediately, as most of the attendees were beer connoisseurs. Chaos ensued as large quantities of weak lager were simultaneously spit out across the table, and any hope of salvaging the tastings was quickly dashed.

Although details are still emerging, a Hop spokesperson intimated it may have been the work of an infiltrator. He said the establishment recently hired a busboy who did not report for his shift the next day. “I didn’t think twice when he showed up his first day in a NASCAR cap. With all the irony around, it’s not easy to make a snap judgement these days. But in hindsight, the fact that he drove an ATV quad to work was probably a big tip-off.”  So far no one has claimed responsibility for this latest act of subterfuge. Additional reporting by Rusty Brown.

Can We All Get Along?

Talk about your target-rich environment. Where’s Jon Stewart when you need him? I will bite my tongue. In any case, I must admit to being way behind on this whole yarn bombing thing. I only heard about it when I saw the banner headline in The Paper yesterday. I am not a fan of Facebook (I don’t “like” it). I suspect I would just waste too much time reading through all the accolades on there about Wigwam.

But while it may be ripe for satire, a case of turning a locally roasted hill of beans into Mount Beacon, it does point out a situation that could, in the not too distant future, become a much more real issue than a goofy Facebook flame game. That’s because the various crises headed our way with alarming speed will not respond to “normal” solutions. It doesn’t matter one bit whether a Democrat or a Republican is in office. It doesn’t matter if we drill till our asses fall off or throw up a million solar panels. Those attempts to solve the current host of major problems we are facing are well outside the solution space.

A long time ago I read something to the effect that, if aliens landed here on planet Earth, they would not be able to tell the difference among the hundreds of languages humans speak. Despite reservations about exactly how this conclusion was reached, it struck a cord–basically acknowledging that our similarities greatly outweigh our differences, and this is much easier to see when you step “outside.”

In fact, one of the best tools we have to work with in this unpleasant future heading our way is simply to work together as a community.

That word community gets bandied about a lot, but it still has not been co-opted out of usefulness. There are any number of ways our community can fracture under extreme duress: racial, political, new vs. old. But these will be the times that we must realize we are much more alike than different. One of the main reasons there is even a new vs. old is because our economic system has been simultaneously gutted and artificially inflated over the last 30 years. Gentrification, rising taxes, a “service” vs. a manufacturing economy—these are all symptoms of late in the day capitalism past its prime years. When the financial system comes down, old and new alike will find themselves in the same sinking boat. We can then either turn up the blame game, or put aside our propensities for scapegoating and try to work together.

Many newcomers bring energy and ideas. Lots of people here for generations know the lay of the land and have already supported each other through hard times, and have ideas of their own. There are examples of old and new accomplishing things together, such as the Information Center at the head of Main Street, and the Dave Miller connector trail. (Dave worked at the hat factory at Madame Brett park, and was one of the few who recalled the old tunnels that once ran under the Fishkill tracks. [Apologies but the formatting has not kept up with the WordPress releases at this link.] Although this solution for connecting Denning’s Point with Madame Brett Park was eventually deemed too expensive, his work and perseverance on the trails eventually led to the completion of the Beacon Loop Trail.)

While the ending of the piece in The Paper was a bit sentimental for my taste, it is true that we really can’t afford to be a community divided in the coming years. We need to get over ourselves. Fast.

Note: As threatened, I am still planning to post my platform for mayor of Beacon. We’ll also be looking at some of the projects that are worth devoting our time and resources to, and which ones should be abandoned.

2 Responses to The Dummy Light Wars