Herbert Street residents facing sidewalk bills of $3000 to $4,000 dollars descended on city hall this evening to express their opinions on the matter. All the residents were unhappy that they were not notified by mail of the construction, or given an estimate of what their portion of the cost might be. Most were also miffed that the bill would be rolled into their taxes over a 10-year period at 5% interest, with a lien placed on the mortgage for the duration of the loan. One resident contended that this would make it difficult to get a home improvement loan.

§ 191-12.3 Installation of curbs and sidewalks; liability for costs.

[Added 5-15-2006 by L.L. No. 9-2006; amended 12-16-2013 by L.L. No. 20-2013]
Where the Highway Superintendent has determined that an existing City street, avenue or public place, including a municipal parking lot, in a public right-of-way running along the front, side or rear yard of any privately owned real property shall be repaved, modified or repaired such that curbs and/or public sidewalks shall be installed, the owner of said real property shall be responsible for a portion of the cost. Fifty percent of the cost of installing the curbing and/or public sidewalk shall be paid by the property owner. The City shall be responsible for paying the balance of this cost. The City Council shall, in its annual budget, allocate sufficient funds to finance the installation of these curbs and/or sidewalks, which shall be repaid by the property owner, with interest, over a ten-year period. This loan shall become a lien against the property and shall be repaid in full in the event the property is sold or transferred.

The city currently has no specific procedures in place to notify residents of infrastructure work on roads and sidewalks. All road construction is listed in the capital plan each year. Both the city administrator and the mayor apologized to Herbert Street residents for the lack of communication. The administrator added that “although we can’t make it right in terms of cost” they would make sure to give notification in the future. 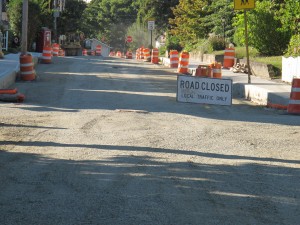 As with any road project that includes sidewalks, Oak Street residents will be getting a bill from the city once the work is complete.

The mayor said he wanted the council to look at procedure in the next workshop. Residents living on Oak Street, with work nearing completion, have received estimates from the City. Residents of Rombout Avenue, scheduled for 3.5 million dollars worth of work next year, have also been notified by the administration, with a public forum planned to discuss various options.

The real issue here would seem to be, why are residents required to pay half of the sidewalk cost? Would it not then be logical to charge us for half of the road cost as well? Despite the fact that residents are required to maintain the sidewalk and are responsible for snow removal, it is public infrastructure. In fact, the City owns not only the sidewalk but has rights to at least several feet of a homeowner’s property frontage.

All Beacon residents are expected to pay for the pavement we drive our cars on, but when it comes to places where we walk, we must pay half if it’s in front of our house. No wonder our city is a hodgepodge of sidewalks to nowhere.

As we noted a few weeks back, the city road engineer suggested a way to save $400,000 on the Rombout reconstruction. Let’s keep looking for these types of savings, and apply them to public sidewalk infrastructure. It seems like priorities are a bit skewed when cars get a free pass but we make homeowners pay for safe streets. It’s also unfair. A homeowner could live on a street for fifteen years that never gets new sidewalks, while a newcomer moves to Oak Street and gets nailed for a couple grand. It’s like playing the lotto. If we continue to follow this logic, why not make homeowners living on dead end streets pay for the entire roadway?

A main objective of our comprehensive plan is to create a more walkable, bikeable city. This planning emphasis on walkability has been proven time and again to increase the economic vitality of a municipality. In other words, a good sidewalk system pays for itself. It may be time to rethink the sidewalk ordinance and pay for pedestrian infrastructure the same way we pay for our roads, all for one and one for all. To do it any other way puts an unfair burden on certain residents while also discouraging safer streets and a comprehensive, sensible system for walking to and from Main Street, parks, schools, jobs, bus stops, the train station, and homes.

Feature photo: New sidewalks on Oak Street, with lots of asphalt to come.