Assuming decent weather, the Beacon Flea opens for the season this Sunday, April 6. We’re big fans of flea markets, particularly ones you can walk to. This was Wigwam’s first profile. It ran last November, when the website was still in beta and when the flea market was ending for the season, so we’re reposting it this week.

Every fair weather Sunday from spring through fall, a large parking lot in the City of Beacon transforms into a bustling bazaar. Here a treasure hunter will find vintage tools, clothing, and kitchen utensils, mid century decorating items, old toys and comics, and plenty of  more modern flotsam and jetsam from garages, basements, and attics across the Hudson Valley region. Observing the scene from a distance, it soon becomes evident that all this activity and commerce is centered around the tallish figure of a woman with long brown-blonde hair, who, whether sweating in a t-shirt or shivering in a winter coat, is invariably clutching a clipboard as she meanders through the array of tents, tables, umbrellas, and the occasional blanket, spread on the ground and covered with wares—all the while answering questions, calming nerves, collecting money.

That would be Emma Dewing, a co-founder and the manager of Beacon Flea. Although she never imagined herself in this role, it’s apparent she is eminently qualified. In the south of England where she spent her childhood, she and her mum would go dumpster diving and bottle digging. Her dad, David Dewing, worked at several museums in London, including his current position as director of The Geffrye Museum of the Home. “I grew up around all this stuff, shelves stacked high with cool bits and pieces,” says Dewing, who also collected all the rusty bits that fell off the cars traveling the main road that passed the sheep and vegetable farm where she lived.

“I think a flea market in this economy was a really smart thing to do,” says Dewing, who also works at a local preschool and teaches summer camp.

The Beacon market, off Henry Street, in the parking lot behind Beacon Health, is winding up its third season. “We had a huge bounce this year,” says Dewing, who expects the event to be a fixture by year five. “The thing I like most about the Beacon Flea is that its right in the heart of Beacon, which is such a walkable city,” says Emma. “Also, it keeps a lot of this stuff out of the landfill.” She expanded the dates this year, adding April and November on either end, “because the vendors are hungry for it.”

But Dewing has no plans to grow the market beyond its current physical size, with room for about 55 vendors. Instead, she will continue to refine the offerings—the market has a strict prohibition on new items and knockoffs. It also does not allow food, as part of Dewing’s mission for the market is to lift Beacon’s economy overall. “Sunday mornings can be pretty dead around here,” says Emma. “This give people a reason to be out and about, eating at local restaurants and exploring the shops on Main Street.” She has partnered with a number of eateries in town, offering 10 percent coupons to her vendors. She also maintains a small booth stocked with flyers, brochures, and business cards of local enterprises. She knows of at least one new antique store inspired to open because of the market.

Dewing’s in-season Sundays start at dawn, when she and her husband Kanoa, and two boys, Ikaika, 8, and Kekoa, 6, pile into their primer orange 1979 Ford 250 and head over to set up barriers and begin greeting vendors. The boys fetch family breakfast from the Yankee Clipper, while dad, a recent convert to the allure of flea market finds, enjoys first dibs on musical instruments and cookware.

Dewing’s transition to flea market impresario began shortly after she moved to Beacon 7 years ago, when she was just Another Brooklyn Emigrant. Her last job had been working for Gander and White, an art and antiques handler. “It was a lot of shuffling across marble floors in blue booties in places like Greenwhich, bringing very expensive stuff to Sotheby’s and Christie’s.” It was not easy work. “It was 3 women and 40 blokes” says Emma, who was relieved when she got pregnant with Ikaika and she and Kanoa looked along the MetroNorth train line for a suitable place to move. 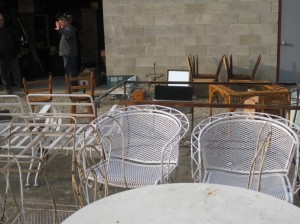 A Mario yard sale on the other side of Emma’s fence.

“The idea for the Beacon Flea had its beginnings in a chat over the back fence” says Dewing, whose new backyard just happened to face the oversize garage belonging to picker and garage sale king Mario Finetari. Dewing’s magpie eye was immediately curious.  “I was watching all this fantastic stuff coming off his truck and disappearing into that huge garage.” Soon enough she was helping with yard sales, and then the two hatched the flea market idea and presented it to the city. “After lots of to-ing and fro-ing, we got the contract.”

“I think a flea market in this economy was a really smart thing to do,” says Dewing, who also works at a local preschool and teaches summer camp. Although she will face competition next year when the old Dutchess Mall Flea market, next to the Fishkill Home Depot, attempts a comeback, she believes the Beacon Flea will weather the comings and goings of various vendors, and emerge that much stronger. In any case, she is committed to the market’s success. “I didn’t realize how much I would love this. I get antsy on a Sunday when there’s no market.” She feels a number of vendors rely on the market now. “People’s lives are really hard. I underestimated how much the vendors would mean to me. It’s a family now.”

The Beacon Flea is open April through November on fair weather Sundays. Vendor fees are $20 for Beacon residents, $25 for out of town, $30 if you leave your vehicle in the vendor space. Non-profits can set up a small table for $5.

One Response to A Magpie Eye Oversees
the Beacon Flea