A Visit With the Beacon Bee Lady

The Bee Lady, aka Beacon artist and beekeeper Deborah Davidovits, invited Wigwam to watch as she started a new hive. Spring is the time to set up new bee hives. Also along to learn some technique was Avi from Eden Village Camp in Putnam Valley. 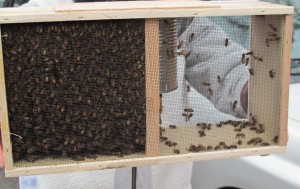 The first order of business is to go buy a big buzzing box of bees. 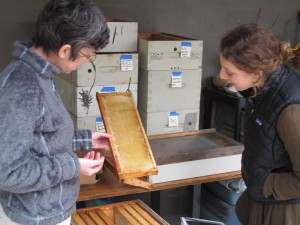 When starting a new hive from a package, or box, you need to set them up with some food to start out. It’s early in the season, and it will be a while before they can survive totally on forage. Deb has left several frames full of last year’s honey for the new bees to eat. 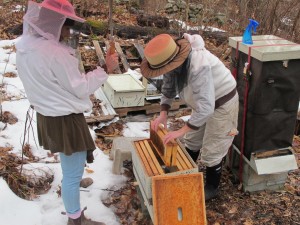 Deb removes a couple of frames from the hive, so that she can empty the bees from the box into the hive. Her existing hive, still bundled for winter, is behind her.

The Bee Lady prefers a screened bottom for her hives, to prevent things like moisture buildup. 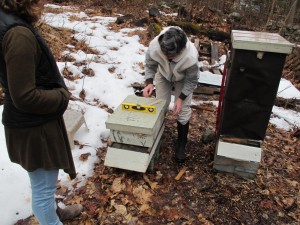 It’s important to level the hive so that the bees build the combs parallel to the frames. 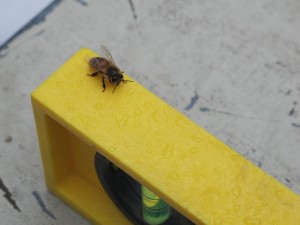 When possible, invite the worker bees to help. It builds a sense of ownership of the hive. 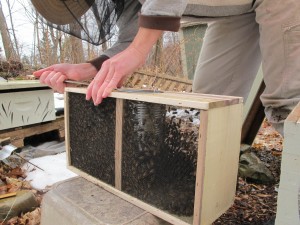 Deb is removing the can containing the queen, which will be set aside. Once the worker bees are in the hive, the can with the queen goes in. It has a cork made of sugar that the bees will eat through, allowing a slow introduction. Otherwise the workers would probably kill the queen. 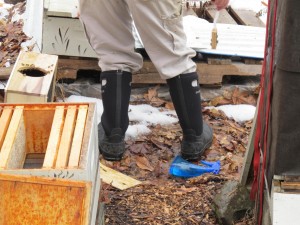 The can gets set aside. The bees are now technically free to leave. They’ve been dampened down with a sugar water solution for the transfer. 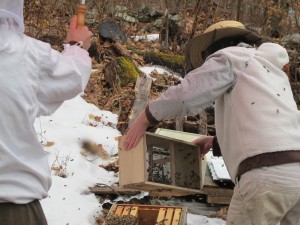 Deb bangs the box sharply, knocking the the bees to the bottom, then dumps them into the hive. The bees were more agitated than expected. Deb thinks maybe the rainy weather was making them unhappy.

Deb decides to let the bees settle a bit before continuing. She came back later with the smoker, introduced the queen, and closed the hive. We’ll know in a week or two if everything is working out with the hive.

In addition to honey, Deb, along with her husband Matt Harle, makes skin care products with all natural beeswax, sold under the Beacon Bee banner.