The bitter cold temperatures made opening day of the Beacon Bread Company all the cozier as those who stopped by due to luck, happenstance, rumor, or inside information were greeted with the smells of fresh baked breads and warm and friendly service from the proprietor and staff.

Beacon Bread Company opens at 7am and has simple breakfast and lunch menus, featuring  homemade toasted breads alongside huevos rancheros and corned beef hash and the house specialty croissants and pain au chocolat in the a.m., and classic sandwiches like American cheddar and Reuben for the lunch crowd, also constructed by chef Jeffrey Oppenheimer with various made-in-house hearty slices of bread. Full loaves and baguettes from the high-end commercial ovens are available for purchase as well. The interior décor is straightforward and welcoming and uses a range of reclaimed materials like old wood and white porcelain doorknobs. Sandwiches run $5-$8. My Reuben was excellent.

Owner and boulanger d’pain Ralph Clemente had been the chef at St. Basil Academy in Garrison, a group home for children in need, for ten years. He is still involved with that organization, which is like an extended family, but felt he wanted to try something else: a bread-based business. Although he took classes at the French Culinary Institute in Manhattan, Ralph says “Bread is just something I do. I know bread.”

What he admits he didn’t know was how to run a food business. Fortunately for Ralph, at some point he crossed paths with the serial restaurateur Kamel Y. Jamal, who partnered up with him and then turned up the heat when he announced he had secured a great spot on the eastern edge of Beacon’s west end, next to the municipal parking lot at Main and Cliff Street. As with all his ventures, Kamel is executive chef at Beacon Bread Company, and is responsible for the restaurant’s menu as well as overall design and concept.

This marks Kamel’s second venture in the Beacon restaurant scene. He also owns Tito Santana Taqueria down the street, which is in its second year. “I have ADD,” says Kamel, who owns Angelina’s in Cold Spring. “I can’t sit still.” Two weeks ago, he opened Beacon Homebrew, a supply outlet for craft beermakers on the east end, at 469 Main Street, with another partner. Three weeks ago, he had a triple bypass operation. We’ll have a more in-depth conversation with Kamel later next month. 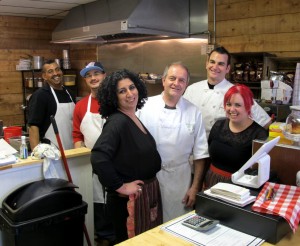 The Beacon Bread Wednesday lunch crew, left to right: Nick Costella, Jason Aber, Kate Nakhleh, Ralph Clemente, Jeffrey Oppenheimer, Diana Currie. It’s only the first day, but this crew is friendly, and seems to already be firing together on all cylinders. 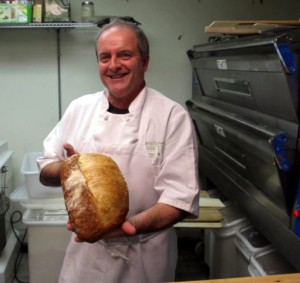 Owner and bread maker Ralph Clemente with a loaf of fresh peasant bread. 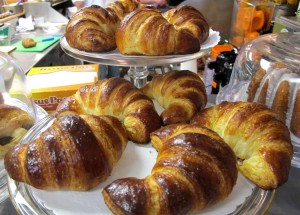 No French accents at Beacon Bread Company, but these aromatic, slumbering shells of delicately flaked pastry will yet have you thinking you walked into a Parisian boulangerie. 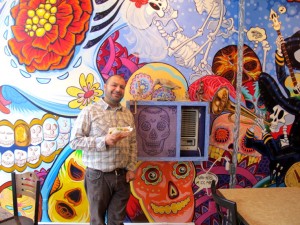 Kamel Jamal says he is not done throwing plates in the air. Here he poses with a Tito Santana taco.