The city council last night took another formal step toward the creation of a parking lot on the east end of Beacon by unanimously passing a resolution to purchase a 1.41 acre parcel of land. The property has frontage on Churchill Street to the south and the Fishkill Creek to the east. The seller is Robert McAlpine, owner of 1 East Main and the Roundhouse. The $537,500 selling price is for the empty lot with a crushed gravel overlay. From Main Street, the property sits behind the old Matteawan railroad station.

The city took out a one million dollar bond in October of 2013 with this project in mind. Last year’s subdivision concept plan for 1 East Main shows the property subdivided into three parcels, with parcel 3 being the lot the city is buying. That plan had approximately parking spaces for parcel 3. Although no plans are finalized, subsequent discussion has significantly lowered the number of spaces (the numbers bandied about range from 65 to just over 50) and include the possibility of a pocket park adjacent to the Greenway Trail along the creek. At one point, the County was proposing a bus stop at the location, and would have picked up a large portion of the tab, but that deal is apparently no longer on the table. The other two parcels will also have parking, but of course will benefit from having a municipal lot adjacent to the retail planned for both sites. From a developer’s point of view, not a bad deal.

The resolution sites the “capital plan” which presumably refers to the comprehensive plan, as one of the steps in its logical justification to turn the creekside property into a parking lot. It also sites a 2014 study by the Dutchess County Department of Planning which noted there was a deficiency of parking in the east end of the City.

However, in that study, the number one recommendation is increased shared use of existing lots. Number three is to increase functional capacity of existing lots and streets, and number four is to charge for parking and enforce regulations. Recommendation number two mentions this lot:

The City is considering purchase of land at Churchill and Main Streets within the 1 East Main Street project site. Development of a large parking lot at this site is perhaps not the best use of this valuable Creek frontage, but including amenities such as a Greenway Trail and park features could ameliorate such impact.

Amelioration? To make (something bad or unsatisfactory) better. So, we build a parking lot on the creek (bad) but add shrubberies (now better!) Seems like that has become our default approach to development in Beacon these days. Recently at a meeting to grant the developer of the property across the street at 3 Churchill a special use permit, a council member was unaware of how many parking spaces were slated for the project. When he found out how many, his comment was “Yes, but many of them are underground.”

Whether underground or behind shrubberies or other flora, paving over land has one main result, and that is inviting more cars into our downtown spaces. Here at Wigwam we don’t kid ourselves: No doubt the vast majority of taxpayers in Beacon are thrilled that there will now be more places to put their cars when they drive all the way into town for a bagel or a haircut or a kitchen utensil down on the east end. But still, what are some of the consequences of this invitation? Are there limits to how many cars we want to accommodate? How do we figure out what those limits are? Are there other solutions available? Stay tuned. 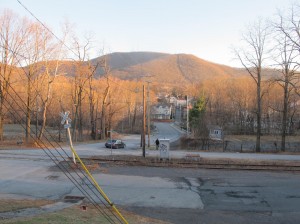 Looking toward the mountain from Main Street, the parking lot will be on the left side of Churchil 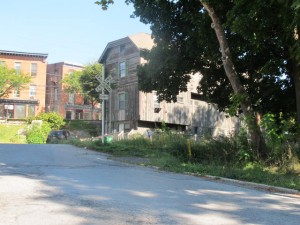 The old Matteawan train station from across Churchill, where there will be another 95 parking spaces as park of a private development. 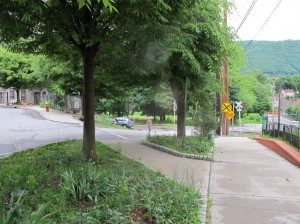 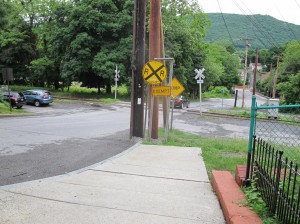 Looking down from Main. The lot will be just beyond the tree line in the left of the photo. 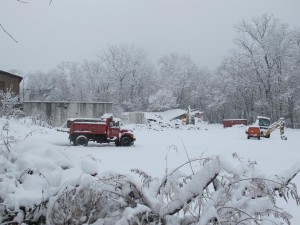 The lot as seen from Churchhill last winter. The cinderblock buildings have been demolished and the block is being ground up.