Over at Beacon Citizen, a Wigwam reader has become incensed over the leaking underground storage tanks at Main and Fishkill. This is as predicted in one of the previous posts about the LUST (Leaking Underground Storage Tanks): “Some of us might even get upset or angry over this egregious fouling of the environment. How could this happen!? Who is responsible?!”

This valiant reader plans to march into a city council meeting and demand that the zoning be changed effective immediately and the gas station be shut down before it is allowed to remodel and reopen.

There are several problems with this approach, aside from the fact that it takes more than 5 minutes to change a set of codes. The first is that, as was also mentioned in a prior post on this matter, gas stations are already specifically disallowed in the Central Main Street zoning district, adopted by the City of Beacon in February 2013 :

C. Prohibited uses. Uses not listed in Subsection A or B above and the following specific uses are prohibited in the CMS District:
1.) Gasoline filling stations.

2.) Drive-through facilities, stand-alone or used in connection with any other use.

Of course, the likelihood of someone wanting to put a fourth gas station in the CMS zone is slim to none, making this clause virtually ceremonial. Furthermore, the new zoning laws cannot be applied to businesses already in existing use. (Although it can be noted that the planning board did not seem to spend any amount of time on this application, and from what I understand, the footprint of the building is set to increase by about 200 square feet. If that is the case, an argument might be made that a non-conforming structure that has been grandfathered in should not be permitted to expand in any manner, or for any reason; and also, that any gut renovations be held up to the new zoning regulations and standards wherever feasible.)

The question is then posed by the reader, “Is the owner…. really wedded to a gas station there? He can’t be persuaded that better use of his land, more lucrative use, is superior to his interests?”

Unfortunately, selling beer, cigarettes, milk and lotto tickets, along with gasoline, is probably about as lucrative a business as you can have in Beacon, at least according to sales tax generated. So if marching on city hall doesn’t do the trick, our guy might consider monkeywrenching by chaining himself to the Xtrafuel pumps. Let’s take a moment to do a rough calculation as to how many Beaconites would be willing to join such a noble economic protest.

I’m not picking on my friend over at Beacon Citizen, it’s just that his purity of thought is useful in pointing out some of the hurdles, contradictions, and gray areas involved in all this, such as the external environmental costs we looked at in the previous post on the tank leak. The lucrative nature of the business is a good example of external costs that affect the social and economic realms: while it may be very profitable to run gas station mini marts in the center of town, the nature of the layout required for fuel pumps causes a severe disruption in pedestrian traffic. Numerous studies have shown conclusively that making a place more pedestrian-friendly has significantly positive impact on the economic vitality of local businesses.

Unfortunately, selling beer, cigarettes, milk and lotto tickets, along with gasoline, is probably about as lucrative a business as you can have in Beacon

Put another way, the gas station is making money at the expense of the surrounding businesses. If you have doubts about this, think of how often you see pedestrians or cyclists along the swath of Route 9 in Wappingers that consists of one strip plaza attached to the next. The three filling stations on Main are little pieces of those strips spliced into the center of our town, and the curb cuts, building setbacks, and deference to the automobile they demand definitely impacts walkability. Less walkability for a non-strip mall business means less revenue. (No doubt it was considered by most a wonderful modern improvement to the city when the buildings that once stood where the gas stations are now were razed and replaced with asphalt, cinder block, and underground tanks.)

So to review the past several posts: gas stations, especially gas stations in the heart of an otherwise walkable place, are a burden on the community. They kill the walkability of the place, which takes away income from neighboring businesses. The costs to the environment of the product it sells, in the form of toxic chemicals leached into the soil and, more problematic, the millions of pounds of CO2 released into the air, are born by society at large, not those who process, distribute, and sell the gas.

Yet this is never accounted for, except occasionally after the fact, and almost always for a mere pittance of the true damage done.

For instance, New Jersey just settled with Exxon Mobil, owner of one of the other gas stations in Beacon, for polluting at two of its refinery sites in the State. This is a screaming bargain for Exxon, essentially lunch money, since the state estimates the true cost of “remediation” at $8.9 billion, the amount it was suing for until reaching the settlement agreement last week. The settlement also covers some liability regarding contamination at 16 Exxon gas stations around the state.

From the article on NJ.com reporting the deal:

“Debbie Mans, head of NY/NJ Baykeeper, said it was puzzling why the state was including the other facilities [i.e. the gasoline stations] in their agreement with Exxon.

‘Those weren’t part of the original litigation, so they’re doing a big favor to Exxon by including them in the settlement,’ she said.”

Hey, Exxon is a big company, it deserves big favors. And Governor Christie is just the big guy to grant them.

So what can our friend with good intentions, or for that matter any of us who think this is a problem, do about all this? The stock answer, of course, is, “Not much. That’s just the way it is.” And it is for certain that next week, the workers from American Petroleum will lower into the ground a couple of nice new tanks. And by Memorial Day, give or take, the new gas station will be open for business, with state of the art fuel pumps, expanses of new glass and asphalt, and plenty of beer, corn chips, and cigarettes for sale. Maybe they’ll even remove the “s” from the “Police Takes Notice” sign. 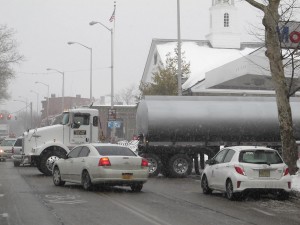 The Mobil up the street gets a delivery of gasoline. The same company handled its tank replacement several years ago. 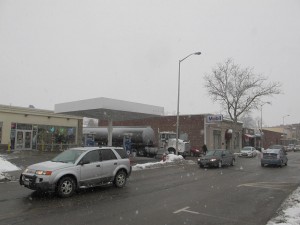 But that doesn’t mean my well-intentioned friend shouldn’t go and voice his opinion at city hall next week. I would just suggest he arm himself with a few more facts. And while chaining oneself to a fuel pump is a bit drastic, one could imagine deciding to buy gas, or lotto tickets, at a station outside of town. True, it doesn’t solve most of the problems (just further externalizes them); these dilemmas don’t have solutions, sorry to say. But who knows, it could rid us of at least one station in town.

While talking to legal and zoning experts to see if there could be something put in to help encourage the phasing out of unwanted businesses on Main Street—for instance, a clause regulating the transfer of franchise operations—there is already general legislation on the books that could be applied to situations like this, and that is the city’s Environmental Quality Review, adopted by the city council on May 16th, 1977:

It is the intent of the City Council that:

A. Environmental factors be incorporated into the existing planning and decisionmaking processes of all City agencies.

B.All agencies shall conduct their affairs with an awareness that they are stewards of the air, water, land and living resources and that they have an obligation to protect the environment for the use and enjoyment of this and all future generations.

C. Protection of the environment and enhancement of human and community resources shall be given appropriate weight along with social and economic considerations, and all these factors shall be considered together in reaching decisions on proposed actions. A suitable balance of social, economic and environmental factors shall be incorporated into the planning and decision-making processes of all agencies.

D. The processes set forth in this chapter shall, as far as possible, be integrated into existing agency procedures and shall not result in undue delays in agency planning and decisionmaking. 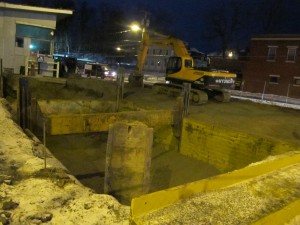 The ground is being prepped for installation of the new tanks next week. All is well.

In all the various projects I’ve seen pass through the city council or the planning board, any environmental considerations have at best been looked at as a necessary set of regulations to be overcome, so that we can get on with the business of expanding our tax base, or “growing our economy.” Perhaps there have been positive findings in the past, and maybe a bad idea or two was taken off the table in the 37 years since this regulation has been on the books.

But how well are we really adhering to what it actually says, including this sentence: “A suitable balance of social, economic and environmental factors shall be incorporated into the planning and decision-making processes of all agencies.”

The general mindset is to give the economic consideration far and away the most weight. But, more insidiously, given our cultural propensity for externalizing costs, we rarely if ever take into account how much any economic gain is in reality cancelled out by the high costs to our social spaces and activities, and the environment, as well as other economic enterprises.

The mindset I’m talking about can also be found on the website of American Petroleum, the “environmental” company (it’s tag line is “naturally, leading the way) removing the old Xtrafuel tanks and installing the new ones:

To translate: Regarding making a mess of the earth, whatever part of your ass is hanging in the breeze, we’ll help you cover it, as cheaply as possible!

There is no judgement in this. American Petroleum is no doubt “a leader in its field,” and is simply exploiting a business opportunity created by our increasingly complex economic and regulatory systems (the energy complexity spiral, coming next week, stay tuned). But there is no way that “remediation” can keep up with the ever-increasing damage inflicted on the planet every second of every day. It’s just an elaborate game, one that, for the time being (never mind the future), generates profits that go into the GNP figures.

On the other hand, if the city truly took the words as written in the Environmental Quality Review regulation to heart, some of these problems that are local could be addressed, or perhaps prevented in the first place. So my advice to our man in the white hat would be for him to ask the city, and all its agencies, to grow a set of balls, or ovaries, and start looking at what this regulation actually says, instead of seeing it as an obstacle to be overcome and rubberstamped, “Due diligence, check. Next.”