The Beacon Farmers Market, currently held every Sunday down at the waterfront near the ferry dock, is allowed to put signage up on city property advertising its existence. The Beacon Flea Market, held every Sunday in the parking lot on Henry Street, directly behind the Mobil gas station, is not allowed any signage other than what they can get on private property the day of the market. 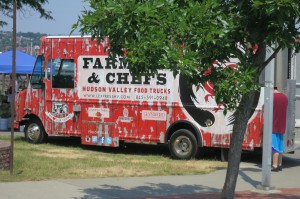 The majority of the vendors at the farmers market are for-profit. The main exception is the Common Ground Farm booth.

Here’s the logic: The entity currently running the farmers market is Common Ground Farm. The Beacon Flea is run by Emma Dewing and Anthony Rosa. Both CGF and BFM rent the space for the markets from the City of Beacon, and essentially act as property managers, subcontracting out smaller spaces to vendors who sell goods to the general public. Each collect space usage fees from the vendor, and pay a yearly rent to the City. But because Common Ground Farm is a non-profit, and The Beacon Flea is not, the City will not allow the flea to put up signage letting the public know they are there. 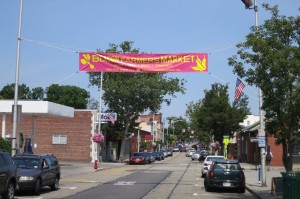 The Farmers Market ad banner hangs on Main directly adjacent to where the flea market is held, behind the gas station. Why not have a flea market banner here, and the farm banner on the West End of town? Give Fleas a Chance!

This policy makes no sense for several reasons. If every vendor at the farmers market were a non-profit, the City might have a case. But most of the vendors at the riverfront, just like at the flea market, are for-profit individuals or small businesses. Also, just because an organization is non-profit, it still pays its workers–the people who run the market make money doing it–probably more than Emma Dewing does managing the flea market. The same misguided policy applies to all of the Sloop Club festivals–they get to have signs because they are non-profit, but most of the vendors that set up at the festivals–bouncy castle operators, food carts, and purveyors of ice cream, tie-dye shirts, handbags, and jewelry–are all for-profit enterprises.

Why does this matter? Because these less-formal, slightly off the grid markets are not only a draw to residents and visitors alike, but they also give the city a kind of resilience, a more localized economy, a place where citizens can do commerce outside of the giant global juggernaut. They even boost traffic for businesses located on Main Street.

There is a possibility that the farmers market will be coming back to its original location on Veterans Place in the not too distant future, creating a nice critical mass for both markets. In the meantime, the City, while it should be commended for renting space to these kinds of enterprises, needs to move quickly to rescind the current sign policy, an unfair double standard that hurts the viability of the Beacon Flea. 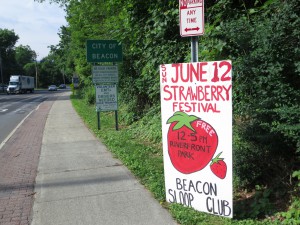 The Sloop Club advertises all of its seasonal festivals, which feature private vendors.