I was sitting in Yummy Taco on 17k in Newburgh last December having lunch with a friend. We met a dozen years ago, when he was running a small eatery on Main Street in Beacon and I ran a second-hand furniture place next door. As we sampled what he called the fusion menu—the place was obviously a former Chinese restaurant that had added a few Mexican dishes—he mentioned the large grant given to Jalor Properties, LLC to turn an old factory building in Beacon into a brewery and taproom. There was a decent helping of skepticism in his tone.

I could understand why. Does Beacon really need yet another pub house full of fancy craft beers that caters to faux lumberjacks and Brooklyn refugees (redundancy alert) and features at least one gourmet dish using an ingredient grown within 500 feet of the entrance? And even if it does, should New York State be handing over $490,000 in grant money to help make it happen?

First, it should be noted that Jalor Properties is not alone in receiving publicly generated cash to set up a microbrewery. Also among the 118 Mid-Hudson recipients of $82.8 million in regional project funding from the State were two enterprises in Orange County: Equilibrium Brewery, LLC, awarded $204,000 for a brewing and canning facility for craft beer,  and Kikkerfrosch LLC, which snagged $500,000 to go toward building a 100,000-square foot state of the art brewery. (Let’s hope “state of the art” doesn’t translate into “greater automation, fewer jobs for people.”) Further south in our region, Bad Ass Cider Company, LLC, of Rockland County, was awarded a total of $1.5 million toward the creation of a Hudson Valley craft beer, cider, and distilling operation.

The full grant list is an interesting document and worth a look. Major trends are money for exploring how to deal with faltering water and sewer infrastructure, for establishing food hubs, for comprehensive town planning, and for waterfront revitalization. Beacon area grants include $100,000 to design a multi-use bridge across the Fishkill Creek at South Avenue and Madame Brett Park; the Town of Fishkill received three grants totaling $935,000 for the Hudson Highlands Fjord Trail project. There were only a couple of truly questionable grants, with the doozy being $3 million to Merlin Entertainments Group U.S. Holdings Inc. to establish a LegoLand park in the lower Hudson Valley.

Permit me what may appear to be a slight diversion at this point. Many of you with kids will know that Legos have (has?) become way more than just the interlocking plastic toy blocks of yore. They have left behind the world of Lincoln Logs and Tinker Toys. Thanks to a movie and heavy PR, they have become, what? A lifestyle? This includes theme parks springing up around the world, with the seventh LegoLand set to open in 2016 in…Dubai.

Here’s Nick Varney, CEO of Merlin, on the Dubai project:

“Not only is the LEGO concept already very popular here, but LEGOLAND’s unique appeal for families with younger children is universal, making it a must do visit not just for ‘local’ visitors from Dubai and neighboring Middle Eastern states; but also tourists visiting the region from all over the world. Indeed, we have no doubt that LEGOLAND Dubai will add a whole new dimension to Dubai ’s leisure scene.”

Wow, Nick! Where to start here? It’s hard to compete in a leisure scene that boasts private islands shaped like the world. And by visitors from neighboring Middle Eastern states, do you mean the throngs of leisure seekers from Iraq and Iran? By tourists from all over the world, do you mean visitors from England or Germany or Malaysia or (of course) Florida and California, places that already have, or will soon have, LegoLands of their own?

Then there is the fact that Dubai itself is already a 25-mile long LegoLand on the Persian Gulf, and quickly transitions into the most desolate desert imaginable. It’s a city that rose in record time, and now has the highest concentration of skyscrapers in the world. Many of them are almost empty: the wealthy one percenters in places like India and Pakistan and Egypt don’t trust banks, and prefer to park their money in real estate—condo units in 80-story trophy architecture perfume bottle towers in Dubai will do just fine, thank you.

The leverage a company like Merlin Entertainments uses to secure a 3 million dollar grant from the taxpayers of New York State is the promise of two things: tourism dollars and jobs for local citizens.

Speaking of citizens, the main job advertised on the LegoLand site is for a position called Model Citizen. Apparently you can now collect a salary for what , in earlier times, was an attribute expected of most by default. According to the LL website, the employees themselves came up with the job title:

“Why are we called MCs? We have chosen to call ourselves Model Citizens because this name is very powerful and has many interpretations that describe us…”

Aside from the Orwellian job title, and the fact that there is not a snowball’s chance in the desert employees chose it, the problem is tourism as a panacea for dying Main Streets and cities built on sand alike. In a global economy in the throes of energy decline, businesses that rely on the general populace flying around the world—or even, soon enough, driving to a neighboring locale—would appear to have a short shelf life heading into a future more tuned in with reality than any fantasies concocted by human beings. Any project going forward that caters to an industry like tourism should be designed with this in mind. There is not much hope of repurposing water slides, rollercoasters and “dino parks” when the tourists stop flocking. 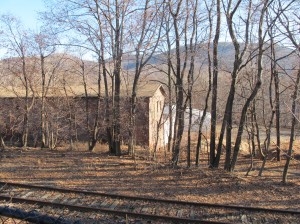 The brewery site is in an old factory building, next to the creek and with a view of the Fishkill ridge.

On the other hand, a microbrewery has more benefits than being a tourist restaurant by the creek with big shiny kettles. In fact, the the number of grants going to small-scale brewers and distillers is a result of various incentives put in place by the State, including legislation passed in July of 2012. From the governor’s press release:

The legislation is designed to support New York’s breweries and wineries, increase demand for locally grown farm products, and expand industry-related economic development and tourism. The legislation protects an important tax benefit for small breweries that produce beer in New York, exempts breweries that produce small batches of beer (regardless of location) from paying an annual State Liquor Authority fee, and creates a Farm Brewery license that will allow craft brewers to expand their operations through opening restaurants or selling new products.

Only in a world used to a seemingly unlimited supply of surplus, relatively cheap energy can concepts like Dubai and LegoLand create a veneer of being logical ways to live on the planet. It is a known phenomena that when you increase energy inputs into a system, that system grows more complex. So in addition to thinking monolithic towers in the desert or plastic toylands in the Hudson Valley or huge casino parlors are lasting ingredients in a sustainable economy, we get a health care system like the one we currently enjoy. Or, even more scary, a global financial system that has become a Byzantine house of cards waiting for the slightest breeze.

The inanity of our bread and circuses, by definition inane to begin with, has reached a screeching apex, and it is only down, down, from here. While Dubai and LegoLand may be extreme examples, Beacon’s economy is by no means exempt from the complexities brought on by vast inputs of energy. In an upcoming post, we’ll look at the job situation from a local historical perspective, and see how this ever-increasing complexity has landed us in a bit of a pickle. Meanwhile, a raising of the glasses to Jalor Properties. Whatever else it may aspire to be, at least it will be a place where something useful is made. The beer grant for Beacon certainly makes better use of our money than a theme park; long after the last tourist has had a tasting, the brewing kettles can continue to be a source of jobs, and produce a crafty brew that should help former Model Citizens face the prospects of long-term unemployment.