Barely a year old, Drink More Good has almost completed its move from a small sublet space across from Homespun Foods to more expansive digs next door to the Town Crier. The new location will feature the company’s signature lines of soda syrups and bitters, a small cafe nook, and a tasting bar. The bar will be toward the back of the space, overlooking the incubator.

This is a full commercial kitchen that, in addition to being the facility where Drink More Good products are made, will be rented out to local food producers, helping them get to market with a minimum of red tape hassle. The kitchen is already up and running, with Lynn Miller of Go-Go Pops in Cold Spring busy making something with cocoa and butter when this reporter stopped by for a visit. There are still several slots left on the kitchen schedule for those interested. 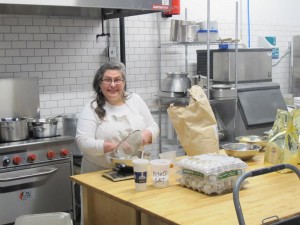 Lynn of Go-Go Pops cooks up something more suitable for wintertime in the Drink More Good kitchen.

The idea for Drink More Good was conceived after Jason, a consumer of large quantities of seltzer water, got tired of squeezing lemons and limes every time he wanted a drink. Having worked in bars and restaurants for 18 years, he knew his way around flavored beverages, and had recently spent some time working under a talented mixologist. He called on his knowledge of crafting bitters and syrups to create a ready made mix. After a friend ordered nine bottles for Christmas last year, Jason connected with another buddy on G chat about a more good business idea, and four hours later he had an operating budget.

The front retail space will also have various loose teas, and the large spice selection that has already endeared the company to many local chefs. For more better convenience, the spices will be sold in ready to go tins of 1 or 5 ounces except when buying in bulk quantities. Also on hand will be shelf-stable goods from other local producers such as honey and soap, as well as an area for bar accoutrements.

The retail side of things should be fully operational by the end of the month or early February. Taking care of the back end is business partner Joseph Gasparino. “He’s an industrial designer who owns his own firm, Gasparino Design. He’s the one doing the real work inside! He is my second partner who came on board around March.”

Meanwhile, The Hop carries the bottled syrups, and Drink More Good sodas are served at Dogwood and The Roundhouse. Or you could probably tap on the door and Jason will fetch you a bottle from somewhere among the shelves, boxes, ladders, and power tools. 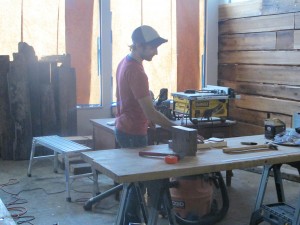