The redecorating job at Xtrafuel on Main Street and Fishkill Avenue has hit a slight snag. The job entailed removal and replacement of the gas storage tanks buried underground. Workers expected four tanks, and were surprised to find several more. Unfortunately, these older, non-operational tanks had never been emptied, and have apparently been leaking gas. The Department of Environmental Protection has been on the scene, and is testing for ground contamination as far away as behind the Yankee Clipper Diner. Oops.

And we were hoping the only problem was lax safety protocol at an open pit construction site three feet from the Main Street sidewalk: 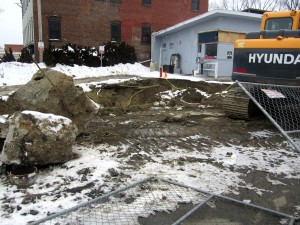