The United States Coast Guard is proposing rules to establish 10 new anchorages in the Hudson River between Yonkers and Kingston. One of the sites proposed is directly off Dennings Point, with three others just south of the Newburgh Beacon Bridge. Currently there is one allowed anchorage on this stretch of the Hudson.

These anchorages do not come without potential issues. It has been demonstrated that the mooring’s ground tackle causes severe scouring of the river bottom, which can disturb fish hatching areas known in some of these locations.

Although fish populations in the river have been decimated in the last 50 years, and commercial fishing has collapsed, there are signs that some species, including endangered sturgeon, may be re-establishing some population.

In terms of disturbance to the human population, it would also allow long term parking for large barges, and there are reports of stadium lighting and loud generators disturbing the peace of the river in places where barges have illegally moored in the past, near Kingston. Some of these barges could also potentially contain crude oil. 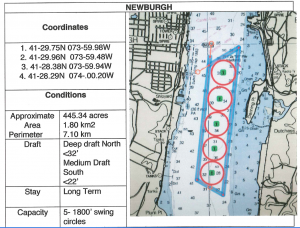 Hudson River anchorage proposal description of the Newburgh/Beacon anchorage location. Overall, 2000 acres of the Hudson estuary could be made available for commercial private enterprise anchorage.

Perhaps just as alarming is that Riverkeeper and other watchdog organizations protective of the Hudson seem to have been caught off guard by this proposal. Wigwam received a letter on June 30th, time stamped 3:19pm, urging us to send a comment to the U.S. Coast Guard Water Management Branch in Boston by 5:00pm asking it to hold public hearings for each of the proposed anchorage locations before making any decision. Riverkeeper also has a request on its Boat Blog with the same date and the same request, and sent a formal letter to the Water Management offices on the same date. This would lead to the conclusion that the big shipping companies are trying to slip this under the radar, and so far so good. Apparently the Coast Guard also thought the request trivial enough that they did not think the public would want an opportunity to chime in. Read the excerpt from the Riverkeeper letter below to see why this is not the case.

It is difficult to speculate why the corporations that control shipping on the Hudson River would suddenly find a need to go from one anchorage to ten. We don’t know enough about the specifics to offer anything other than conjecture at this stage. But crossing the river two times a day almost every day gives us an appreciation for the Hudson as an active commercial waterway. With the oil industry facing hurdles on local pipeline proposals, regulations of oil tanker cars that use the rails on the west side of the river, and a volatile crude market that is currently experiencing a glut requiring more storage capacity, having a place to park a few million extra barrels of oil for several months could come in handy.

Wigwam will follow developments and report on any possible meetings open for public comment. If the proposed anchorages do go through, we hope the operators at least have the courtesy to put the generators and lighting on the low settings during eagle roosting season at Dennings.

From the Riverkeeper letter:

The scale of potential impacts to thousands of New Yorkers is clear, raising this rulemaking to the level of a “significant regulatory action.” Under Executive Order 12866, a federal action falls into this category if it “is likely to result in a rule that may…adversely affect in a material way… the environment, public health or safety, or State,local or tribal governments or communities.” The establishment of anchorage grounds over 2,000 acres of a nationally-recognized estuary ecosystem, placing large ships adjacent to numerous local communities, will undoubtedly create material impacts. Significant regulatory actions require a detailed analysis of costs and benefits. It will be essential for the Coast Guard to fully analyze the ecological and economic impacts and weigh them against the factors in favor of the proposal. This analysis will require active outreach to the agencies and organizations involved in habitat management and restoration, as well as residents and community leaders on the banks of the Hudson. 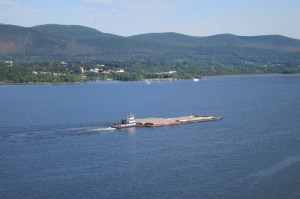