New Constellation To Emerge Over The Hudson

“Looking at the stars always makes me dream, as simply as I dream over the black dots representing towns and villages on a map. Why, I ask myself, shouldn’t the shining dots of the sky be as accessible as the black dots on the map of France? ” —Vincent Van Gogh, in a letter to his brother Theo.

“Imagine yourself and thousands of others experiencing the emergence of a new constellation over a unique island in the Hudson River. Every evening, as the sun goes down, starry lights emerge one by one with the stars of the night sky. Hovering around the perimeter of the castle ruin, these lighted points refer to features of the structure still standing, as well as those details which no longer exist—creating a new constellation connecting past and present through this inspiring light-based public art project—bringing new energy to this majestic part of the Hudson River, and the Hudson Highlands State Park.”

That’s the jumping off point of Melissa McGill’s latest, and most ambitious, artwork, Constellation, to be created on  what is colloquially known as Bannerman’s Island, after the arms dealer who bought the island and built a castle as a residence and ammunitions depot in the early 1900s. The six and a half acre bit of glacial deposit rock appears on some maps as Pollepel. 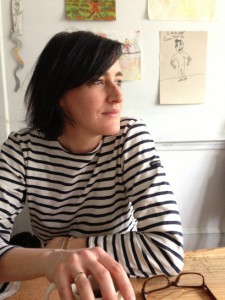 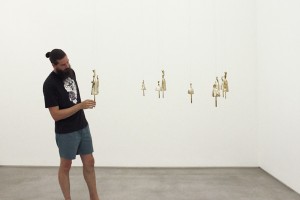 This large public art work will delve into what the artist calls the “space between absence and presence,” a theme she has been exploring over her career. An early example takes the traditional artistic concept of negative space to a new level by creating pieces based on castings of the insides of porcelain figurines. The resulting shapes retain eerily distorted resemblances to the originals, perhaps how they would look after being worn down by centuries of erosion,  or a representation of the space between atoms.

A more recent iteration involved casting these “negative spaces” in bronze and turning them into belles/bells by adding clappers—sound is also a big part of another current public work that recently opened at Manitoga, the Russel Wright Center in Garrison, NY.

Influenced by Parenthood and DIA

Melissa says moving to Beacon eight years ago and starting a family has influenced her art. “Living up here, outside the city, having kids and observing the way they experience the world, I’ve become interested in offering a more interactive experience for viewers.” She is excited that the work will be accessible and free to view from many vantage points on both sides of the river, as well as the MetroNorth train and boats on the river.

The island can  be seen in aerial views of DIA:Beacon looking south. Some of the work managed by that institution has also been a big influence on the artist, including the iconic land art pieces Spiral Jetty and The Lightning Field.

With much of the planning, engineering, and research already accomplished, the artist is currently running an Indiegogo campaign to raise money for the fabrication, installation, and eventual removal of the seventeen metal poles that will be used in the project. The goal for this segment of the fundraising effort is $80,000. (Almost half of the overall funding of $300,000 is already in place. This may seem like a large sum, but it’s actually a fairly low budget for a public work of this magnitude.)

A Galaxy Beyond Art

“This has become much more than an art project,” says Melissa. Several years of research has had her working with engineers, architects, archeologists, geologists, the parks department, and ornithologists. She searched out a New York State manufacturer when sourcing the poles, and selected Polich Tallix fine art foundry across the river in Rock Tavern for its expertize in this type of installation. Glass maker Niche Modern of Beacon is providing the special glass globes as an in-kind service. After consultation with an ornithologist, the glass will be tinted a light blue, a color that will render them more visible to a bird’s eye.

Although the constellation will use the castle ruins as a departing point, sketching some of the missing structure in slender aluminum poles and points of light, Melissa is emphatic that this is only a starting point, and the piece is about the “long view of the island’s history.” The objective is not preservation or restoration, but using the island, with it’s rich geological and human history, as a foundation for both a meditation on past and present and a new creation going into the future.

5 Responses to New Constellation To Emerge Over The Hudson