On The Homefront: Rationing

A look at wartime rationing by the president of the Beacon Historical Society. Posts featuring the city’s historical archives will be a regular feature on Wigwam.

Shopping in the United States during World War II turned every housewife into a smart, calculating consumer. Meats, sugar, processed foods, butter, fats, oils, silk, shoes, gas, and many other commodities were rationed for the war effort. To make buying “fair for everyone” in the U.S., the Office of Price Administration (OPA) began issuing ration books of stamps to each citizen in the spring of 1942.

Beacon families like George and Helen Vrendenburgh and their one-year-old daughter Patricia were issued a ration book by the OPA with different colored stamps—red stamps for meats, butter, and fats; blue for processed foods like canned vegetables and soups. Stamps depicted various war machines such as tanks, airplanes, and cannons. 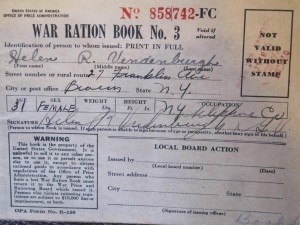 In February of 1944, the OPA began issuing tokens made of compressed wood. If the stamps were used like dollars, change was made by using tokens with the same color coding system as the stamps. Each token was worth a point. If you redeemed a stamp for a piece of liver worth six points, you would receive 4 red tokens along with the meat.

Life during wartime meant long lines at stores, scarce goods, and walking home with the groceries; if you could get gas for your car, to conserve fuel the national speed limit was 35mph. No wonder everyone was skinny in those old movies!