The Hop Skips Down the Block

A quick look at what’s happening on the East End.

It’s been a bit of an open secret recently, but since I bumped into The Chancellor himself, John-Anthony Gargiulo (aka Resident Beer Guru), for anybody that doesn’t know, The Hop is moving  a bit further east to 554 Main Street, directly across from Beacon Falls. The Hop owners have purchased the building, and will be taking over the entire first floor. “We’ll be offering full table service and an expanded menu,” said John-Anthony, who expects the new digs to be up and running by late summer. The main section will be like the current setup, with more formal dining areas to the side. Plans also include outdoor drinking and dining. 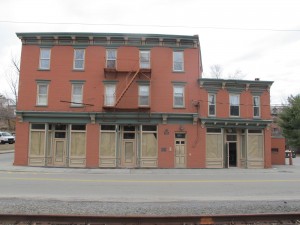 The Hop is moving into this building on the corner of Main and Verplanck. Looks like a lot more staff will be needed.

Meanwhile, a block west, our sources confirm that Benny Viera, the owner of the large building directly behind the dummy light at the end of East Main is getting serious about selling; although it’s been quietly on the market for a while, he was spotted with a local real estate agent at the property today. Look for a listing soon. 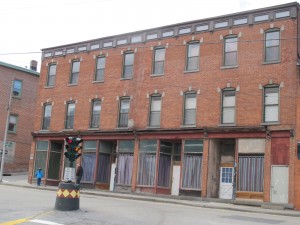 These storefronts have been vacant for a long time, but they could see life again soon.

Pat Freeman of Freeman Woodworks was busy building out the storefront for Peoples Bicycle at 430 Main Street, in the big old hotel (which is also for sale). The front was taken out many years ago, when a car drove into it, according to long-time owner Richie Rogers, who once owned quite a few buildings in this part of town. Peoples has a long-term lease. They hope to be open soon. Meanwhile you can get a tune-up or buy a new or used bicycle at their Maple Street warehouse.

The old iron columns will be returned to glory, standing guard at the new entrance to Peoples Bicycle. 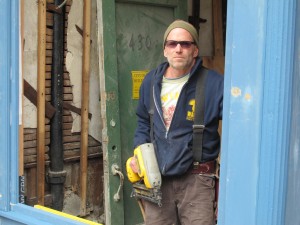 Pat Freeman is all business. There is no skimping on this renovation. 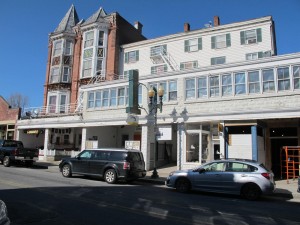 The old hotel is for sale.

Across the street, at 445 Main Street, By a Thin Thread is just about ready for its ribbon-cutting ceremony, scheduled for April’s Second Saturday. Stop by and see what a great working space this is, and of course read Alterations on Main Street, our profile of seamstress Allyson Vermeulen. 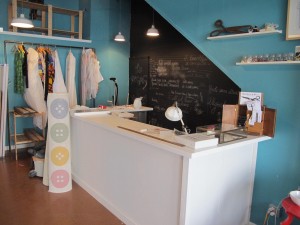 By a Thin Thread’s new space has an inviting look. This is the point of sale counter area. 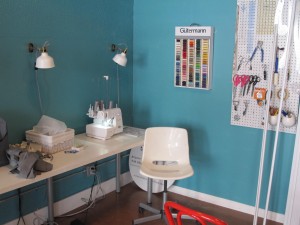 Luxuries include several work stations and a private dressing area. 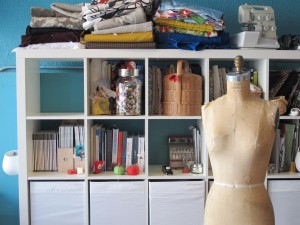 One Response to The Hop Skips Down the Block